A random assortment of memorable moments, thoughts, views, and quotes from our time at Worldcon 75 in Helsinki.

The tidbit certainly gives food for thought. If true, it gives an added bonus my decision to keep my phone out the way on a small side table. Phone out of direct line of sight: +2 to concentration roll!

Clearly, defining characters’ gender matters greatly to some people and not so much to others (like the “Who knows?” Finnish author). Of course, not all writing nor all works of fiction are or should be the same, or created for the same purpose. For example, when the mood takes me, I’m delighted to read fluffy comfort lit that at other times would drive me to distraction. I think the variety that exists is fantastic, and limiting our expressions—especially in speculative fiction—is, well, limiting. We as a species do indeed contain multitudes.

Autographs: I got my copy of Maresi by Maria Turtschaninoff signed.

Self-evident, when you think about the pragmatics of editing. I’m going to steal that idea to apply for my various projects.

I’ll have to try and remember this. Not that I review things that often, but to vet other reviewers. (Also, note to self, a related critique panel mentioned Mary Robinette’s method which I believe is the one she tweets about here.)

In the exhibits hall: On guest of honor Nalo Hopkinson’s table, a puzzle featuring her book covers had been set out for passersby to work on. Irresistible! And a really inventive, unintrusive promo method.

Made it: There’s photographic proof I was at Worldcon!

From the panel: Jack of All Trades, Master of Several with Carl, Roseanne Rabinowitz, and Jani Saxell

As a Jill of Many Trades myself, I found the topic fascinating. I’d note that finding information may have gotten much easier, but a lot still depends on an individual’s ability to sift the useful from useless and absorbing the appropriate bits.

Seen in person: We’ve streamed it a few times before, so we knew the routine, but it was surprisingly exciting to be able to attend the Hugo Awards ceremony.

Seen in person: I also had several nice random meetings with both old friends (some of whom I haven’t seen in over 15 years) and new-to-me people. For example, on Friday we saw a Finnish journalist and fan Jussi Ahlroth on morning tv talking about the con and later that day actually met him. Cool. 🙂

Speaking of cool: Did you know that John Howe (yes, THAT John Howe!) was at Worldcon?!? Another fascinating panel through and through. Elizabeth Moon’s name came up in other panels, too; clearly I need to look her up.

Seen in person: Speaking of looking people up, I found a few other new-to-me authors and artists to try. I often do that if I like what someone’s said at a panel or program item.

The end is nigh: At some point during the con, signs for marking the end of the line (when queueing into program rooms) appeared for people to hold up and pass on. Of course it would’ve been nicer if long lines hadn’t happened at all, but it was a practical and humorous solution to an annoying facilities problem.

Lively discussion and many, many examples. I kept missing references writing down others. I wish this panel had been videotaped!

Seen in person: A live astronaut. All three presentations / panels with Kjell Lindgren were fascinating! Here’s the video of The Kjell & Jenny Show: A NASA Astronaut and his PAO where Kjell talks about the astronaut selection and preparation process.

The Kjell & Jenny Show: A NASA Astronaut and his PAO by Worldcon 75

Once upon a time on a lunch break: I ate at the Messukeskus Hesburger fast food joint (also fondly known as Hese) purely out of nostalgia. And was proud of myself, both as a Finn and an introvert, for sharing a table and a conversation with a total stranger. I don’t typically do that. At the same place my top half was also, memorably but unfortunately, splattered with hot chocolate. Oh well. Accidents happen, and I wasn’t scalded.

I have a bad habit of code-switching out of pure sloth with Husband since he knows Finnish so well. Perhaps I ought to try and stick to one language at a time. Apart from making puns; that I won’t give up. 🙂

From the panel: On the Care and Feeding of Secondary Characters with Fiona Moore, Carrie Patel, Mur Lafferty, Teresa Nielsen Hayden, and Diana ben-Aaron

Really great quote. If you know who said it, please let me know! (Jo Walton???)

“I liked the way everyone was pleasant and polite. Panelists seemed to get along well with each other, even when they disagreed. Audiences seemed appreciative. The whole thing was good, low-tension fun. I sometimes think the discussions on the Internet leave people with a really wrong idea of what the experience of attending a convention is like. Problems are few, attitudes are positive, and people laugh and smile a lot.”

There were problems, and I witnessed some true clueless behavior first hand, but on the whole I agree with Greg. I saw so many examples of people greeting each other, sharing small moments of connection, helping each other out in general, troubleshooting tech issues, sharing tips and smiles, and giving up their seats to those who needed it or who might enjoy a panel more. Fandom definitely is my family. ❤

Yup. Rep gets around.

Since the Twitter search function officially stinks, I’m collecting my Worldcon 75 commentary in a blog format for better archiving.

First, I wrote a series of initial tweets thanking just some of the people building…

Organizing my @Worldcon75 thoughts will take time. In the meanwhile, below are some well-deserved thanks.

Thank you everyone who volunteered for both #Worldcon75 bids and spread the word; thank you @Saija_Aro for bid work & co-chairing…

…thank you @crystalvisits – there wouldn't be a Finnish worldcon w/out your tireless work! https://t.co/efPp81HUBQ

Thank you @drkarenlord for your masterful, mindful, world class performances as toastmistress. #Worldcon75

Thank you @nwbrux for administering the Hugo Awards for #Worldcon75. So. Much. Work you, Kathryn Duval & al. did!

…and/or working at the con.

A very special thanks to registration. Fastest, most convenient event registration ever. Kudos! #Worldcon75

To top it off, I heard through the grapevine that the registration dept heads had never handled this large an operation before. #Worldcon75

If other worldcons could learn only one thing from @Worldcon75, smooth registration is my pick.

For dealing w more crowd control & queue management than anyone was able to foresee, TY @worldcon75 security (Turva). Much appreciation!

Thank you design & devops for a beautiful job, and programming for rocking it! #Worldcon75

…and/or putting together wonderful panels.

Next, a few personal panel favorites & thanks. #Worldcon75

Thank you Baron Dave Romm for Art of the Snapshot & Mark Halmagiu for To Boldly No: Realism in Space Sci-Fi panels. #Worldcon75

Also, for the most considerate & thoughtful panel moderation I've seen at a con, thank you @scottlynch78 / Gender and “Realistic History”.

TY @CoraBuhlert @shaunduke @tnielsenhayden @SFF180 for keeping Book Blogs panel chipper at 10am on the last day of a 5-day con. #Worldcon75

History as Worldbuilding = such a fantastic panel to finish my #Worldcon75 with.

#Worldcon75 History as Worldbuilding panel tidbit: a word existed for 'turd wrapped in newspaper and tossed over your neighbor's fence'.

Re: that History as Worldbuilding tidbit: languages are awesome! Too bad I missed who shared the detail (and where & when it was used).

Last but certainly not the least:

Finally, THANK YOU @worldcon75 fans and voters. Thank you GoHs, volunteers & staff. We literally *couldn't* have a con without you. Kiitos!

We’ve returned from a great trip to Finland and Worldcon 75. 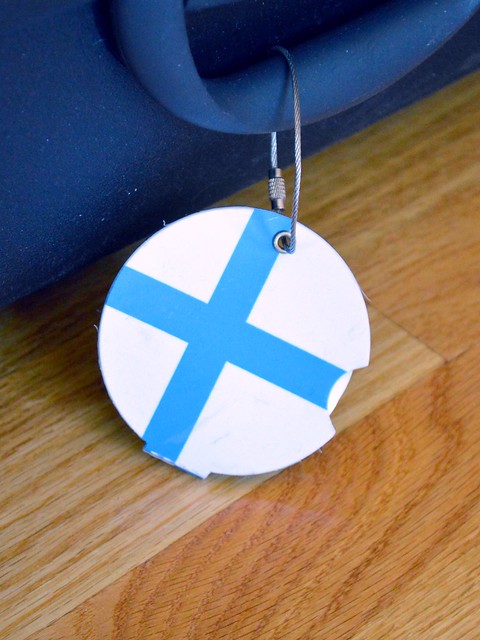 I’m not only jetlagged, I’m exhausted from meeting so many people – to borrow a word from Finnish, I’m rag tired, meaning ‘limp-as-a-wrung-rag tired’ (rättiväsynyt). I suppose the closest equivalent in English is bone tired, but it feels like I don’t have the bones left for that!

I confess the only way for me to get through the last days of the con was to fake it in a grand way:

“Eyes bright. Chins up. Smiles on.”

I’m not an extreme introvert for nothing! 🙂 I loved the trip nevertheless. 😀

Now it’s nice to be home. After settling back to my routines, I’m looking forward to getting back to work!

I’ll open my shop again on Monday (August 21). See you then!

Since contributing to the Helsinki in 2017 campaign to get Worldcon to Finland, I haven’t spoken much about Worldcon 75 here; my W75 Kermit-flailing has taken place at my hobby blog.

Well, the time has come. We’re about to set off to Helsinki!

The Playfully Grownup Home Etsy shop is in vacation mode. I will make it available again on Monday, August 21, 2017.

I’m very, very excited! Not only do I get to visit friends and relations, I get to hang out with my geeky friends and hopefully make new ones.

In the meanwhile, hope to see you in Helsinki – but if not, I hope you enjoy your August!