This month, in addition some smaller projects, I custom-made two new table runners, designed to be either used alone or layered with each other. 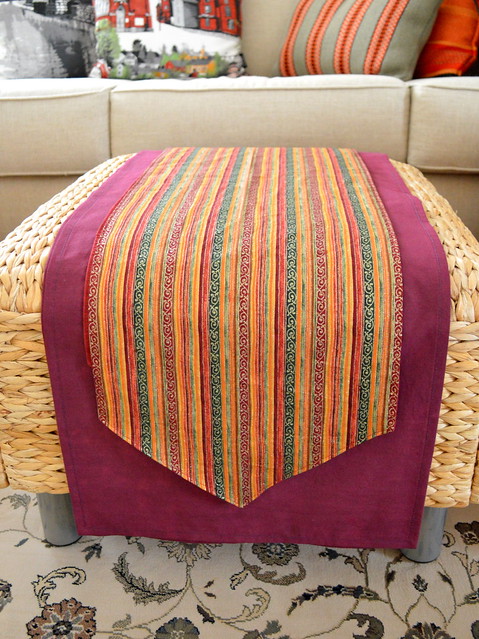 I’m in general not big on seasonal decor, but these I think are nicely fall-ish. Since the stripy runner has dark green, burgundy red and gold as well as brown and orange, it’s also usable at Christmas time – versatility is even better.

After a lot of thinking, I’ve come to a decision: I will close down Playfully Grownup Home on Etsy on Wednesday October 14, 2020. You may remember that last month I was wrestling with the timing. It’s now decided, and, as sad it is to end something longstanding, I feel good about my decision.

The absolute last day to order anything via Etsy is, therefore, Tuesday October 13, 2020!

I will turn the shop off on Tuesday the 13th, at 9 p.m. EST, and only turn it back on briefly on Wednesday to mark orders as sent through the Etsy interface so you can track your orders.

Unfortunately, as much as I’d love to be able to offer a going out of business sale of some kind, I cannot since Massachusetts regulations are too strict for me to comply with.

I will keep the Playfully Grownup social media accounts (Twitter and Tumblr) at least for a while and continue to blog here, but less often. I will likely also continue sharing photos on my Flickr account.

At the home front, we’ve had a bit of a covid-19 scare. I developed mild symptoms during one weekend. Fortunately, I was able to get tested that same day and results the day after. (Negative!)

The downside to my corona scare was having to re-schedule both my dentist’s and flu shot appointments. The next open ones were almost a month away (oddly both on the same day despite being by very different providers and in opposite directions). The good thing, however, is that people are actually taking advantage of the flu clinic. A sincere Thank You!

The Massachusetts covid-19 numbers seem to have started downwards (the graph plotting new confirmed cases for the past month peaked on Sept 08), so we’re probably just past the consequences of July and August summer gatherings. Unfortunately, despite that, hospital admissions, ICU cases and intubations are all up, including admissions at our local hospital.

I find it stressful, but have come to grips with the fact that I can’t change the behavior of others, only mine (which I have). To spare myself some grief, I’ve limited my news intake and doom scrolling, and am concentrating on other projects.

For instance, I finished my basket-weaving project: I made 8 bins out of recycled brown paper bags.

They look quite handsome even if I say so myself, certainly for a first try. I also whitewaxed a wooden bowl and painted a step stool.

I also started painting a basket and rearranging a couple of rooms, but haven’t finished yet due to busy. Some days are like a death by a thousand papercuts, but I manage. At least the library just announced they’re moving into phase three of reopening, with many, many more curbside pickup hours than before!

The weather has definitely turned more fall-ish, even though some day temps still rise to summery readings. And there are still flowers! Just one reason to love wild flowers – they’re adapted to the local seasons.

We don’t know what this plant is, but it probably came to our yard as a transplant thanks to some birds or ground critters. It’s pretty whatever it is.

Husband and I also had an absolutely wonderful family event (and I’m not talking about myself): we had CHIPMUNK BABIES!!!

Our resident chipmunk (whom we named Chipper and headcanoned to be female) is a mother! Chipper herself is missing from this photo, but we saw her earlier returning to the hole and the three babies with her cheeks full. 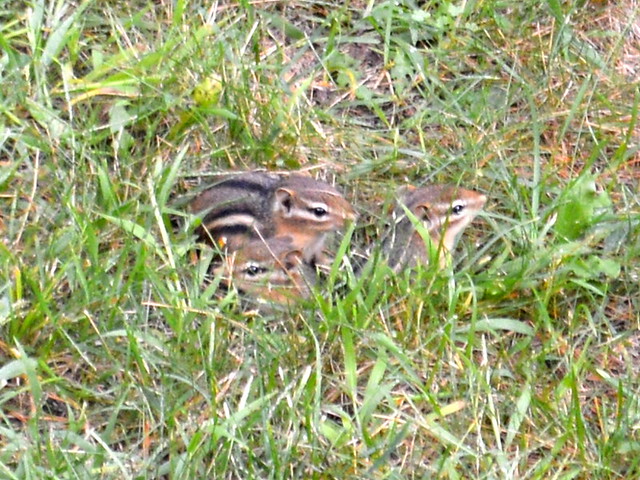 And later I was able to snap a few photos of Chipper herding her brood: 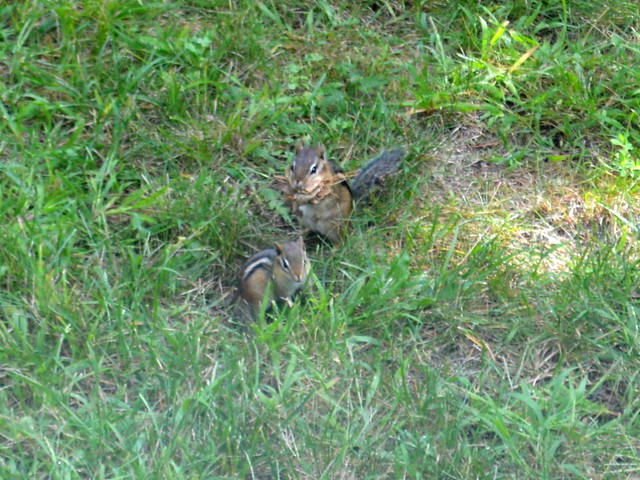 We absolutely did not know Chipper was female. At best it was a guess on the basis of how careful she was whenever she was about to leave her hole. Mostly, though, it was a fervent hope amidst the trashfire of 2020 that was based on her maybe perhaps if-we’re-very-lucky and I-could-be-wrong-but-doesn’t-she-look-a-little-thicker-round-the-middle because it-would-be-so-fabulous-during-this-awful-year.

Babies would explain the change in her behavior we observed late this summer, too. The kids are all gone now, and even Chipper seems to have abandoned her hole. (Chipmunks do rotate their territories every few years, so this seems normal.)

Never did I ever, EVER think I’d end up living anywhere where this was a possible life event! And it certainly couldn’t have come at a better time.

Hope you and yours are well. Please continue to be considerate. Wash your hands. Wear your masks. Stay safe. ❤

Despite the covid-19 pandemic altering how I perceive time to pass (in decidedly odd ways!), it does pass. It’s Labor Day weekend already here in the U.S.

Happy long weekend! I’m having a little time off the blog. See you here next Thursday.

The biggest work-related news, perhaps, this month is that I was able to start blogging again. Also, this summer I rolled out a trial of free U.S. shipping on Etsy purchases of $35 or more. Let me know your thoughts on either!

Thanks to a huge, completely unrelated project, I didn’t do much sewing at all this summer. At the beginning of September I got back to it, and it felt really good! Among other things, I made two fabric mousepads and a large zippered document pouch as potential prototypes: 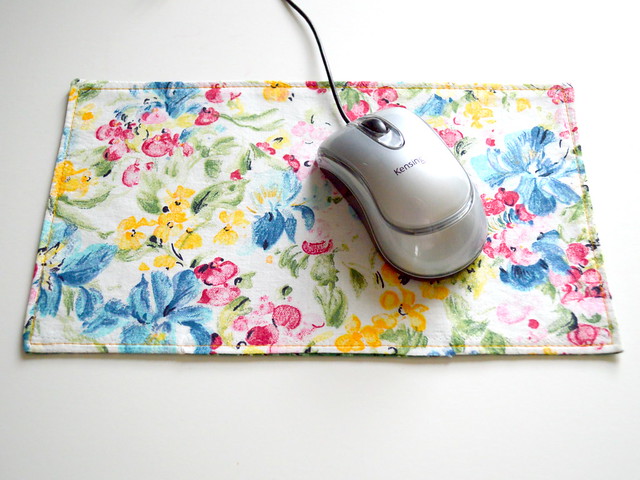 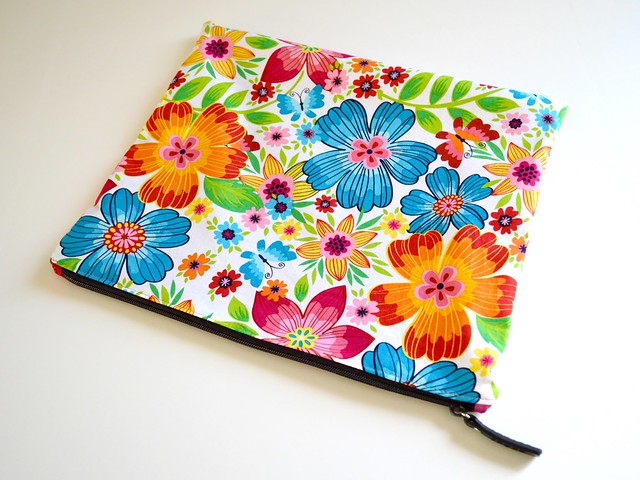 Husband and I will be strenuously testing the mouse pads in the coming months. So far so good! I’ve also continued to churn out fabric gift bags in various sizes and types. I’m increasingly leaning towards using and re-using them instead of spending money on wrapping paper.

Reading was especially good this month, including this Earthsea omnibus illustrated by Charles Vess:

At some point when I wasn’t looking, fall got here:

I hope you’ll enjoy the season! I know I will: we have candles and firewood stocked up and ready to go. 🙂

Today’s the autumnal equinox here on the northern hemisphere, and it’s starting to show:

This year looks perhaps – it’s a little too early to tell for sure yet – to be especially vibrant.

Apparently I want to open each month’s recap with “I can’t believe how fast this month has flown by” but even so, September really has gone fast.

For banned books week this year, I read The Hate U Give by Angie Thomas.

This month’s other reads were thought-provoking and absorbing, too.

I made a canvas hanger cover prototype. Choosing the fabric took a little doing – I initially wanted a tightly woven medium-weight cotton, but most that I got my hands on were a little transparent. A cotton duck to the rescue, then.

The placemat prototypes I started in February and finished earlier this summer are in use, being tested. (And I finally remembered to upload the photos!) Some of the details work, but others don’t, so at least as is they cannot be produced. (Yet.)

The weather in the beginning of the month was very summery still, including some extremely muggy days. Approaching the end, we got fall temps with plenty of rain – very welcome both. I was worried for the water table during the dry summer months.

Husband and I carved time for a mini-getaway to visit the White Mountains of New Hampshire. As I grew up on a flood plain (VERY flat!) I found the mountains absolutely ah-mazing! 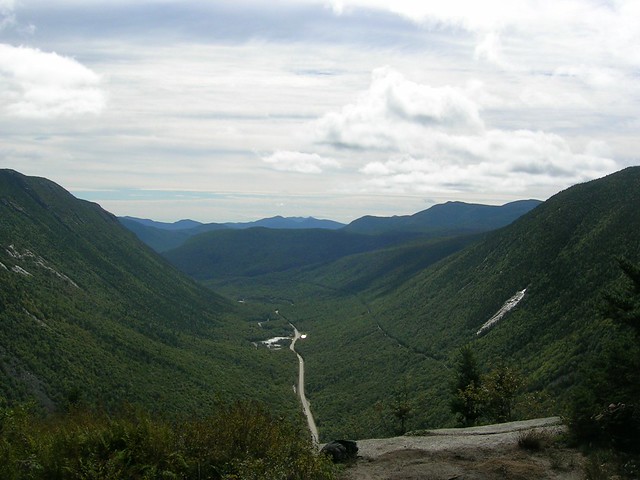 On the gaming front, we broke in a new-to-us board game, Pandemic. It’s a collaborative game where players race against time to cure and, if possible, eradicate four diseases. It can be very unforgiving if the luck of the draw is against you, but a lot of fun! 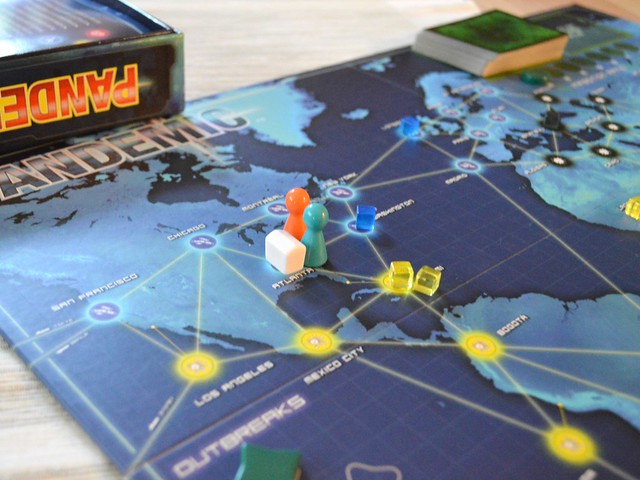 We played WoW, too (although not quite as often as I would’ve liked), and got our first characters leveled to 120. Yay! 🙂 I’m leveling a human first for strategic reasons (gaining rep faster for allied races).

I also broke out some tastes of home: tar-flavored liquorice candy. 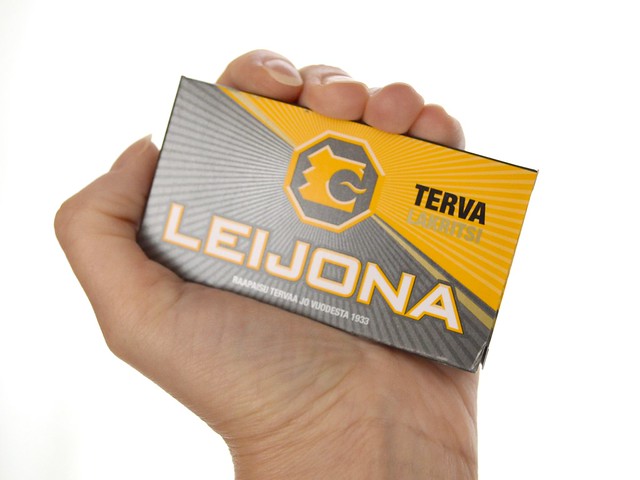 Now we’re enjoying seasonal weather and starting to plan the end of the year in detail. I can’t believe it’s almost October!

Starting today, for a limited time, get 15% off select items at the Playfully Grownup Home shop on Etsy!

Organize for the semester with mini storage cubes, book bags or keychains. Decorate your dorm room with handmade wall art. Stay fresh by stashing a lavender sachet in your sock drawer. Or get a jump on holiday gift selecting.

The Playfully Grownup Labor Day 2017 sale runs August 31 – September 04. No order minimums – buy one personal safety reflector, or a pile of book bags, or anything in between. (Sorry, U.S. buyers only due to Etsy’s restrictions.)

The Hobbit / Lord of the Rings inspired door sign by AllyBoosCreations at Etsy.

Checkmark stickers by honeyinked at Etsy.

…rainbow-colored downloadable “You can’t retire from being awesome!” print by FromTheRookery…

…or a rainbow bean bag set by GrandmasChalkboard:

(Note that, as usual, each seller sets their own policies.)

We happened to have excellent conditions for the 2015 supermoon lunar eclipse: clear skies, warm weather, and a dark backyard for early night viewing. The best shot I got is from the beginning of the eclipse (with a little computer enhancement).

Very neat. And, although celestial photography won’t become a part of my skills in a hurry, it was nice to try. 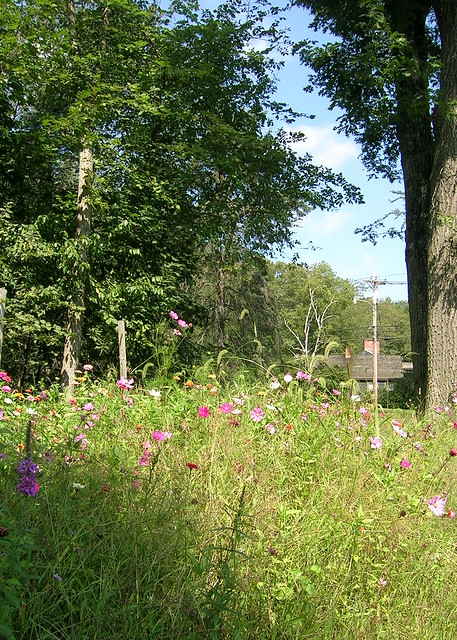