Since I didn’t post this last month, here’s my August reading pile: 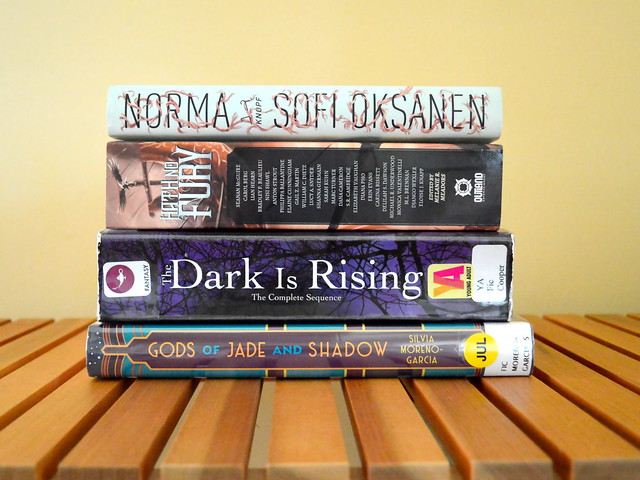 From top to bottom: Norma by Sofi Oksanen, Hath No Fury edited by Melanie R. Meadors, and Susan Cooper’s young adult series The Dark Is Rising in a one-cover edition (Over Sea, Under Stone; The Dark Is Rising; Greenwitch; The Grey King; Silver on the Tree). Lastly, there is Silvia Moreno-Garcia’s excellent Gods of Jade and Shadow.

What’s on your TBR stack at the moment?

My March reading piles stretched well into April, so my current pile isn’t that large: 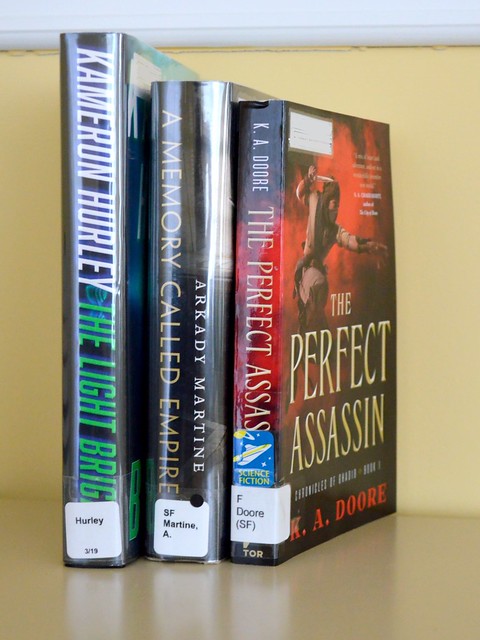 The quality will make up for the quantity, though, or so I suspect: I have Kameron Hurley’s military time-traveling scifi novel The Light Brigade, Arkady Martine’s debut novel A Memory Called Empire, and The Perfect Assassin by K.A. Doore.

I got quite an awesome haul from the library: 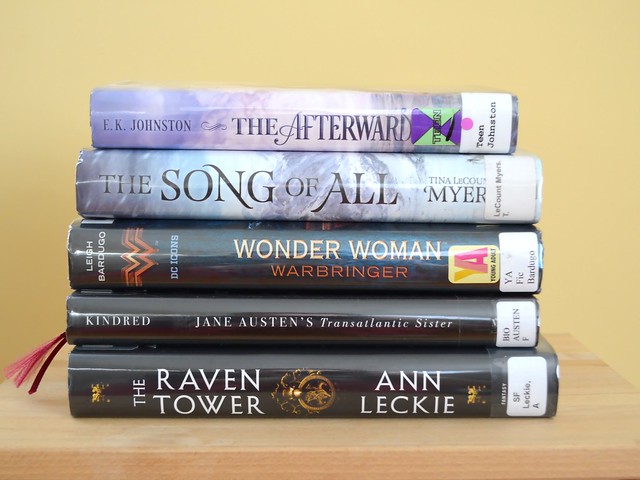 In fiction I found The Afterwards by EK Johnston, The Song of All by Tina LeCount Myers, Wonder Woman: Warbringer by Leigh Bardugo and Ann Leckie’s The Raven Tower. On the non-fiction side, there’s Jane Austen’s Transatlantic Sister by Sheila Johnson Kindred.

I’m apparently really hungry for reading, for that’s not my only pile this month: 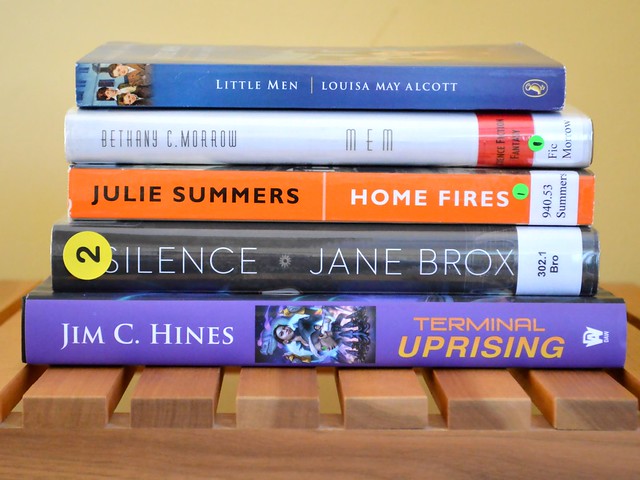 From top to bottom: Little Men by Louisa May Alcott, Mem by Bethany C. Morrow, Home Fires by Julie Summers and the non-fiction title Silence: A Social History of One of the Least Understood Elements of Our Lives by Jane Brox. Finally, there’s the not-quite-brand-new-anymore Terminal Uprising by Jim C. Hines.

In addition, I’m slogging my way through all of Agatha Christie’s Hercules Poirot books, slowly but surely. The latest I’ve gotten to is Mrs. McGinty’s Dead – a fascinating case hinging (in part) by the first name Evelyn, which can apparently be both male or female. I love the fact that despite a Master’s degree and 20+ years of daily use I still learn new things about English!

My February reading has been all over the place. Just look at this representative selection: 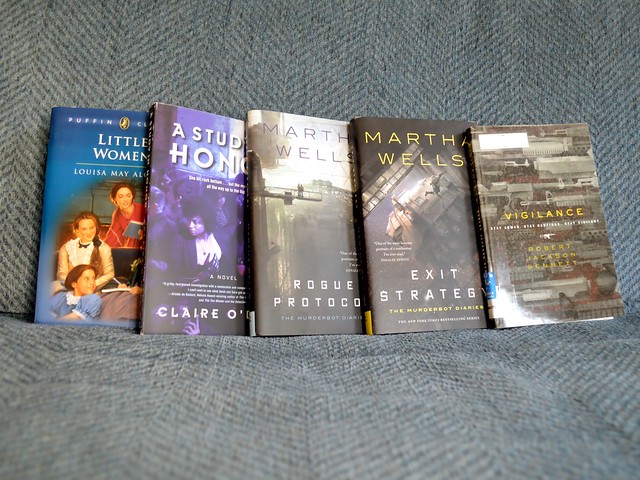 From left to right: Little Women by Louisa May Alcott, A Study in Honor by Claire O’Dell, Rogue Protocol plus Exit Strategy – the latest two in the Murderbot Diaries series – by Martha Wells and, finally, Vigilance by Robert Jackson Bennett.

In my youth, I read a lot of what was then called girl lit (or tyttökirja in my native Finnish). I’ve never read some of the classics in their original English, though, so I gave Little Women a shot. I have to say the young me missed so many of the nuances!

A Study in Honor, however, was the most refreshing take on the Sherlock Holmes & Doctor Watson duo I’ve come across. It was at times hard (and at times boring) to read about Watson’s PTSD, but once I started thinking of that part as formation of personality (like coming-of-age stories) it made more sense to me. Also, I LOVED how many women were present both in the fore- and background! It took me a while to get to book 1, but I liked it so much that the sequel, The Hound of Justice, will go directly to the top of my to-be-read pile.

And I just adore Murderbot! (Don’t let the name fool you!)

My latest book order came in at the end of October, but I haven’t cracked any of them open yet. 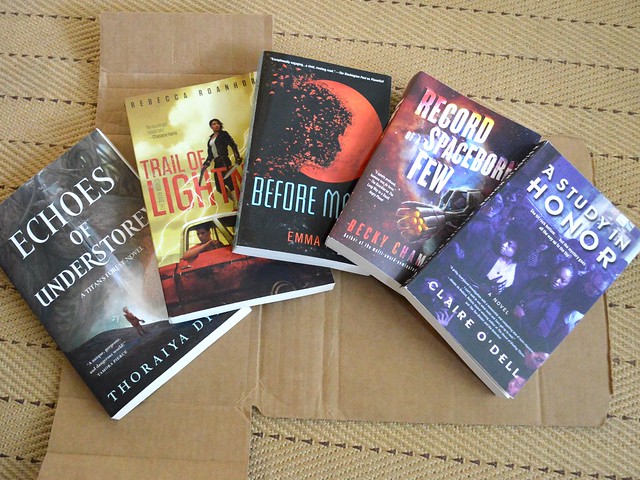 From left to right: Thoraiya Dyer’s Echoes of Understorey, Trail of Lightning by Rebecca Roanhorse, Emma Newman’s Before Mars, Record of a Spaceborn Few by Becky Chambers and, finally, what sounds like a very interesting take on Sherlock Holmes and Doctor Watson, A Study in Honor by Claire O’Dell.

November is already looking like a great reading month. Anything else you’d recommend?

Time to get out some re-reading in addition to books that are new to me.

From left to right: Mishelle Baker’s Impostor Syndrome, The Long Way to a Small, Angry Planet and A Closed and Common Orbit by Becky Chambers, Nightwatch by Sergei Lukyanenko, A Blade So Black by L.L. McKinney and, finally, Wise Craft Quilts by Blair Stocker.

What’s on top of your reading pile?

After last month’s busy, it was pure joy to take the long Labor Day weekend and just read. For pleasure. For hours on end! Here are some of my latest reads:

It’s as if after a comparative reading drought, I’m restocking my story reserves. 🙂 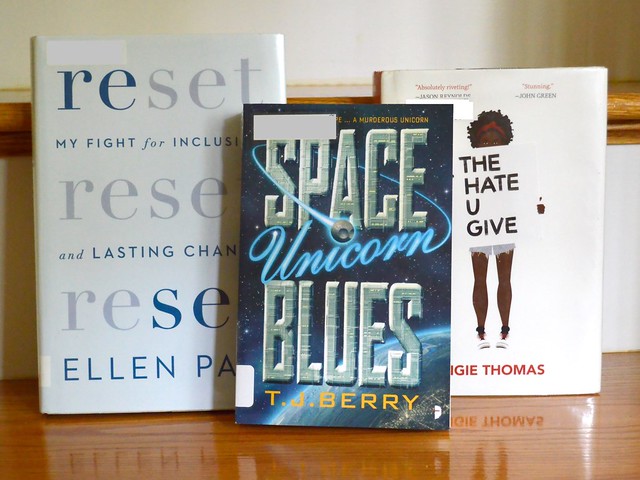 And more from an inter-library loan haul: Reset: My Fight for Inclusion and Lasting Change by Ellen Pao, Space Unicorn Blues by T.J. Berry and Angie Thomas’s The Hate U Give. The last one I’m reading for the banned books week.

I’ve devoured Siege Line, Mirage and The Shattered Vine already. (I heartily recommend Mirage, by the way!!) I couldn’t resist a peek into Space Unicorn Blues even if I haven’t quite finished my current read. 😀

In addition, Unthinkable: An Extraordinary Journey Through the World’s Strangest Brains by Helen Thomson is also back at the library. What a fascinating read that was!

Anything especially intriguing in your TBR pile? Do share!

Phew! So far I’ve been way too busy to do any gaming, and I’ve barely touched my TBR pile in August even though there’s plenty I’d really like to read. 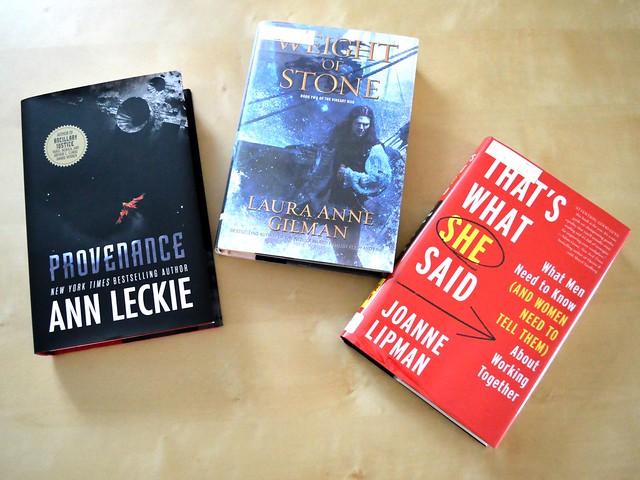 From left to right: Ann Leckie’s Provenance, Weight of Stone (sequel to Flesh and Fire which I read last month) by Laura Anne Gilman and That’s What She Said: What Men Need to Know (and Women Need to Tell Them) About Working Together by Joanne Lipman.

I wonder whether I can get through all three; I’ve started Lipman and Weight of Stone, at least.

I have a great selection of reading right now:

From left to right: Flesh and Fire by Laura Anne Gilman, Hit by Delilah Dawson, Gilgamesh: A New English Version by Stephen Mitchell, Murder in the Mews by Agatha Christie, The Winter War: Russia’s Invasion of Finland, 1939-1940 by Robert Edwards and Just One Damned Thing after Another by Jodi Taylor.

Not pictured is Dumb Witness by Agatha Christie because it’s on my nightstand. Also, I’ve already read Gods, Monsters, and the Lucky Peach by Kelly Robson. 🙂

Here are some of my June SF/F readings:

From left to right: The Other Wind (more Earthsea stories) by Ursula Le Guin, Vanished by Kat Richardson and Siege Line by Myke Cole. Plus, I’ve already read some non-fiction and the novelette Ironclads by Adrian Tchaikovsky.

Anything special in your reading pile?