Take a look at this absolutely brilliant Tardis dress: 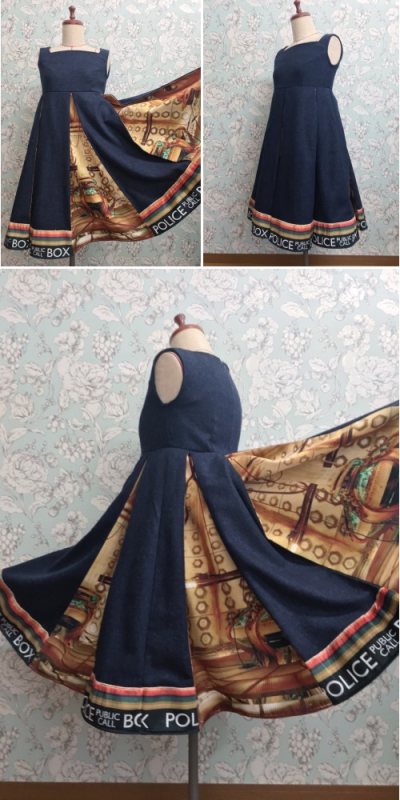 May Yet on Tumblr; collage by Eppu Jensen

It was made in 2018 by May Yet for a friend to wear at the Tokyo Comic Con. Sadly, the original post where I found it is now gone, but Yet wrote a new post where they give a bit more info and show new photos.

The dress is so gorgeous you could also wear it for semi-formal, non-geeky events. The absolutely best feature is that IT’S BIGGER ON THE INSIDE! Aaaaah! 😀

I listed a few canvas pouches at the Playfully Grownup Home Etsy shop. They’re made from a variety of prints and solids. I used up remnant canvas pieces to make them.

The light green one has a really great, understated but elegant floral pattern outlined in white. I added a coordinating green and white polka dot accent for the drawstring channel. 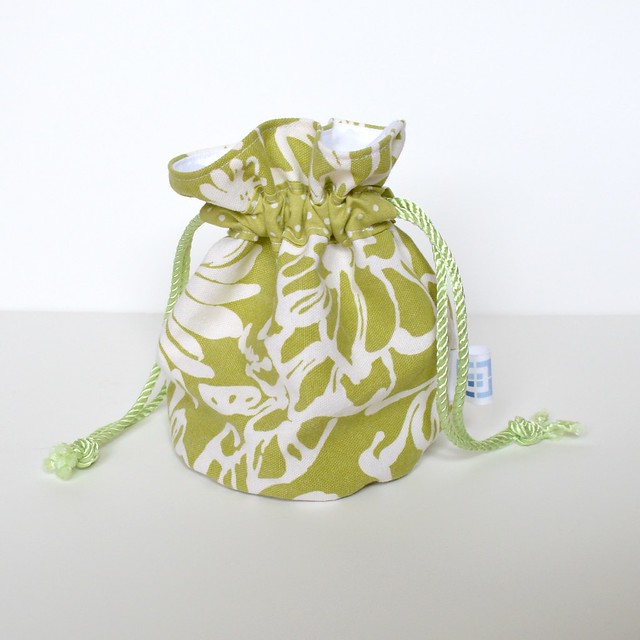 For the blue and turquoise floral, I found two good accent color matches but couldn’t decide which I preferred, so I made two versions. Problem solved! 🙂 One has a turquoise-on-turquoise polka dot print… 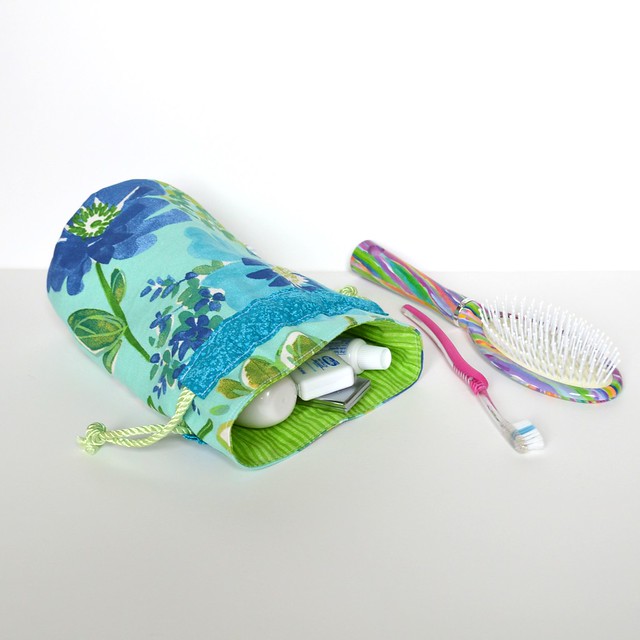 …and the second a solid bright blue cotton. The latter makes a nice, strong contrast. 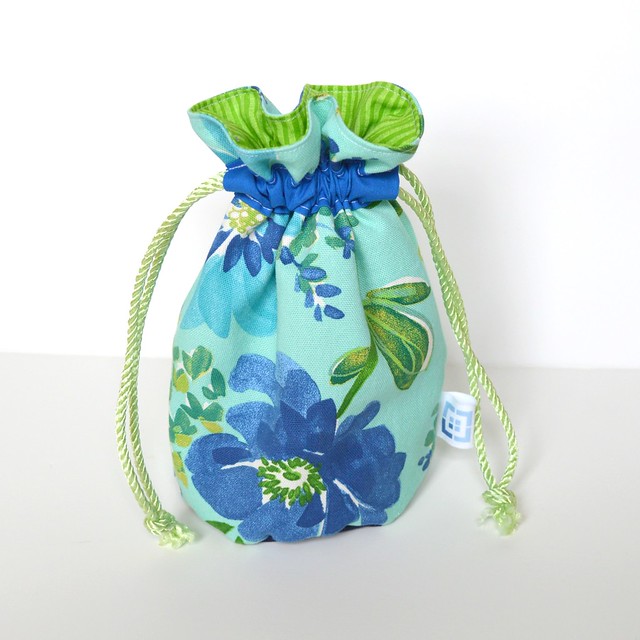 Both colorways have a round bottom made from solid-colored canvas – pale mustard for the green and navy blue for the blue and turquoise bags.

Find them in the Playfully Grownup Home > Carry Me section. And as always, if you have any questions please don’t hesitate to ask!

I had to share this in honor of the U.S. opening of Star Wars: The Last Jedi. Nicole Balch used a life-sized Boba Fett wall decal to finish off her son’s Star Wars -themed room, and the results are fantastic.

Nicole Balch at Making It Lovely.

French home decor magazine Marie Claire Maison toured jewelry designer Solange Azagury-Partridge’s London home. The rainbow rug in this sitting room is an interesting take – and certainly catches your eye, even with so much color elsewhere in the room:

While there are pieces of furniture with very modern lines, they go quite well together with the ornate stained glass windows, moldings and laurel and vine motifs on the painted ceiling.

There are also rooms where a single color dominates, for example in this aptly-named Sunshine room…

…with plenty of playful details:

I really admire Ms. Azagury-Partridge’s skill in pulling together such different elements into a cohesive whole. Visit Marie Claire Maison‘s article for more!

Found via Making It Lovely.

Incorporating colors, especially strong colors, into interiors can be intimidating. Add to that floral pattern, and the task might seem insurmountable.

Not so for Melbourne-based interior designer Camilla Molders. She creates contemporary rooms with plenty of color, clean-lined and elegant furniture, and lush textiles and rugs. In her Prahran Flowerhouse project, what might otherwise been a grandmotherly floral print sofa instead becomes luxurious, almost throne-like.

The neutral walls and curtains allow the furnishings and rug to stand out. The repetition of flowers in the upholstery as well as wall art is very clever – prominent but not overdone. The geometric rug is the perfect antidote to the flowers, and brings the saccharine factor down immediately despite its unapologetically strong reds and fuchsias. And did you notice that the sofa legs are painted a matching color?

It’s really impressive how well Ms. Molders has matched the colors in the rug with those of the sofa upholstery. The room wouldn’t work nearly as well if they didn’t coordinate so perfectly.

I don’t think the rug could ever come home with me, but that sofa is looking more and more appealing. And I might have to try the trick of repeating the same motif in textiles and art in a room – very effective.

Found via Desire to Inspire.

The new Star Wars Episode VII trailer got me thinking back to the prequels and their costuming. I remember being initially impressed by Queen/Senator Amidala’s garb. Especially after Leia’s rather Spartan wardrobe, the lavish fabrics and colors on Padmé were a joy to watch.

Several Amidala’s outfits have historical inspiration, but two such forebears stand out. Other people have made the connection between Mongolian Khalkha people’s traditional wear and Queen Amidala’s Episode I Senate gown before me, but finding a gorgeous museum-preserved historical exemplar reminded me of it. In the comparison below, on the left is the museum piece and on the right Amidala’s gown, complete with headdress.

These outfits are very similar indeed. Details vary, but the general shape is the same, as is the hairdo, the braid sheaths, the chains hanging from the skull cap flanking the face, even down to the two makeup dots on the cheeks under Amidala’s eyes (not visible on the doll), and the concept of wide robe sleeve cuffs. (Rebels Haven has a side-by-side comparison of a historical photo and concept art that makes the similarities even clearer.)

The Wikipedia article on Padmé lists another historical model, this one from Episode II. A costume ball dress for Russian Grand Duchess Xenia Alexandrovna with a kokoshnik headdress is said to have inspired Padmé’s refugee dress.

I thought I also noticed that, in The Phantom Menace, Amidala’s costumes predicted reasonably accurately what kind of a scene she was to be in: complicated and layered meant talk, relatively pared-down and pragmatic meant action. It turned out I was wrong, but not entirely. While the two most comfortable-looking costumes – the blue and grey Tatooine outfit and the maroon battle uniform – get the most screen time and the most vigorous activity (and most pants), Padmé does do a lot of static activities (standing around and talking) in both. The elaborate, courtly dresses are reserved exclusively for scenes with discussion, or, at most, stately walk. There are fewer outfits that dominate in terms of screen time in both Attack of the Clones and Revenge of the Sith; the closest match is the Geonosis arena suit.

Other Amidala outfits from Episodes II and III that make my historical-dress-Spidey-sense tingle include the blue embroidered Tatooine dress plus several of her Senatorial dresses with their corset-like bodices and wide hems and sleeves. My favorite is probably this:

The deep purplish-blue loyalist committee dress is seriously gorgeous. The streamlined Tudor profile is elegant, the robe sleeves nod to medieval sleeves (perhaps there’s even a hint of kimono sleeve design?) and the embellishments add to, not overwhelm, the whole.

Happy New Year to each and everyone! I had such a relaxing Christmas and a great break in general. I hope that was also the case for you. It’s good to be back to a fresh start, though, with some fresh snow outdoors. I just love how everything looks so clean and clear and soft after snowfall.

Speaking of soft: Every year, I try to include something handmade in my Christmas presents. Here are some soft projects from 2014 that I most enjoyed making: 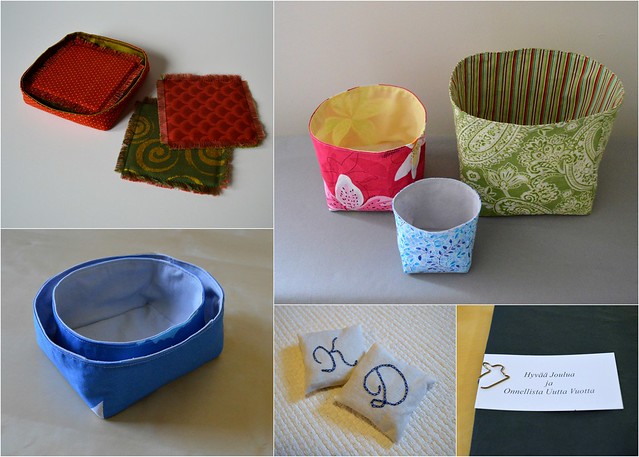 In this case, part of the pleasure came from being able to use for personal gain a fabric bin construction technique I developed for my business.

My new favorite pair of socks: