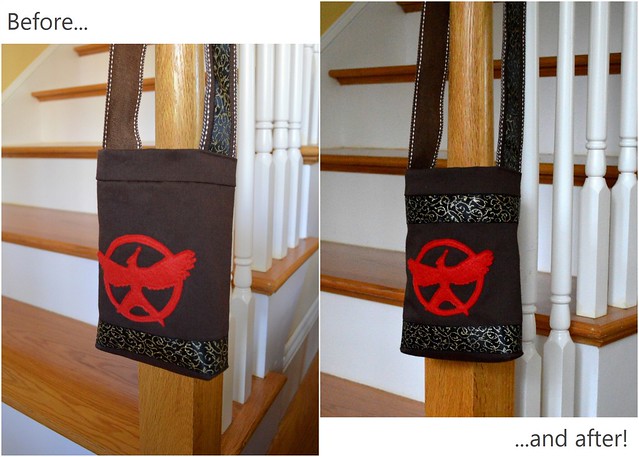 …and oohed & aahed over this Effie Trinket cosplay:

It’s made by Morisa9 on Deviantart. The butterflies are the most stunning part – she cut, spray painted and detailed all 400 or so of them. Wow! Love it!

One more post before tomorrow, this one a short and sweet one. Astounding Hunger Games lip art by Eva Senín Pernas:

I’m impressed by the concise look that our real world design and PR / marketing forces have created for The Hunger Games world. There is a website for The Capitol, constructed from the point of view of the story world, that includes messages from the citizenry, a series of capitol tv shorts and more. Every detail looks deliberate and carefully considered, and could easily be regarded as products of an efficient propaganda machine. (If videos designated “mandatory viewing” are not propaganda, I don’t know what is!) For example, one of the sections, District Heroes, contains these posters:

On the surface the posters are beautiful, but when you consider the accompanying soundbytes in context, they become eerie. For example, the District 12 poster says: “Lily Elsington, 6, captures the spirit of the next generation of District citizens: ready, willing, and eager to fuel the Panem of tomorrow.” We see the same colors and materials that characterize Distric 12 in The Hunger Games and Catching Fire movies – neutrals, greys and darks, rough textures, worn edges, wood and metal. However, the selection of a six-year-old girl as the face of 12 makes me wonder whether there’s a deliberate hint at child labor to rattle the real world viewer. Props for the design team!

Then there’s the official Hunger Games site by Lionsgate, with cast interviews and costumed stills. (There are very few details of the sets or locations, which is a shame.) Issue 1 introduces the real world filmmakers, the script, District 13 President Coin and a first peek of finished footage. Issue 2 concentrates on Katniss, Gale and the story world film crew assigned to Katniss. The Panem Instagram account(!) provides more of the same gorgeous high-res images of posed characters.

Equally deliberate and impressive, albeit quite different stylistically, is the District 13 site.

Purporting to be messages uploaded into the official Capitol network by rebel hackers, the District 13 site is heavy with visual noise and distorted images. There are a few extremely short video clips and excerpts from story world personnel files. Nice, but compared to the Capitol marketing effort, quite rudimentary, which probably is, again, a deliberate choice.

Having read the trilogy, there will be no major surprises for me storywise. However, the main joy in seeing tv or movie adaptations of books is the visual experience and the screenwriters’ and actors’ interpretations of characters. I’m definitely looking forward to Mockingjay. Almost there!

For the bag you will need:

durable fabric; webbing or sturdy ribbon for the shoulder strap

This tutorial is for an unlined bag.

To cut the fabric and webbing:

To attach the logo onto the bag body:

To sew the bag:

The bag is now ready!

The details can be varied almost infinitely to make bags of different sizes, shapes and looks. Optionally, the strap or the bag body can be decorated with ribbon, fabrics of different colors or other patches, logos or appliques. You can even make a tote by cutting the long strap into two shorter handles instead and sewing them on the middle of the back and front panels. You can also make only the logo and handsew it onto a bag, shirt, jacket or a hat you already own.

I’ve been expecting The Hunger Games: Mockingjay, Part 1 for weeks now. The wait has felt especially long because, for me, this year’s Hollywood movies have been quite short on interesting topics and/or characters. To tide me over better, I’ve re-read the books, re-watched both The Hunger Games and Catching Fire and even sewed myself a small shoulder bag with a mockingjay logo.

This week, leading up to the Mockingjay, Part 1 opening night, I’ll share some Hunger Games themed finds and materials, including tutorials for a simple mockingjay logo felt silhouette and a bag.

For the felt silhouette you will need:

paper and printer or photocopier

felt (or some other non-fraying material) 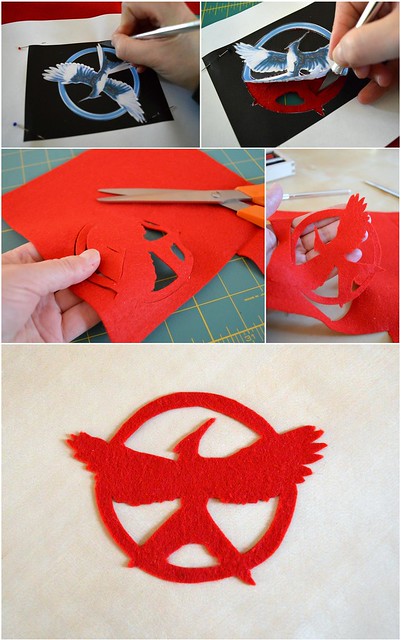 To make the logo felt silhouette:

The logo is now ready to be attached! It doesn’t need to go on an item made from scratch; it can be handsewn onto a bag, shirt, jacket or a hat you already own.

My silhouette is approximately 4.5” / 11 cm wingtip to wingtip and 3.25” / 8 cm top to bottom. I don’t think I’d make it any smaller if attaching the logo with a sewing machine, for some of the curves were challenging enough already to do neatly.

Tomorrow I’ll share a tutorial for my Mockingjay shoulder bag.