A spiderplant began to blossom just as I needed a perk-up.

Thanks, nature. You never fail.

Who knew brown paper bags and faux flowers would make such a handsome wreath?

This wreath is by Adrienne at Crafty Little Gnome. Very nice indeed! She used a commercial straw wreath base, but I bet you could replace that with a homemade base of some kind. And depending on the color of the flowers, the wreath can be as versatile as you want.

Spring is my absolute favorite time of the year, but fall does have its share of beauty besides the colors. The other day I gathered a few rose hips for a bouquet from some wild rose trimmings. 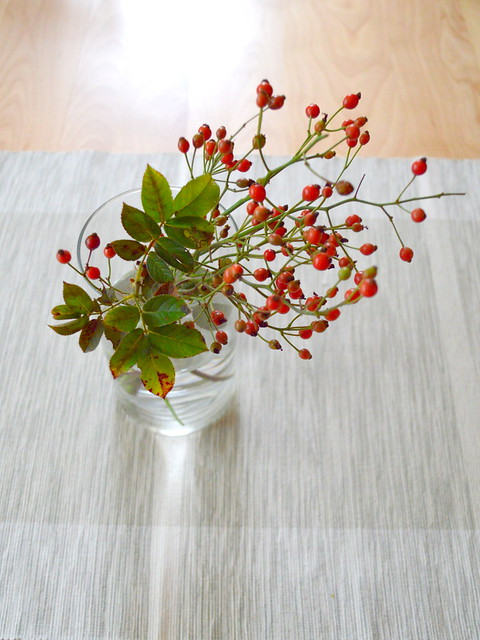 And just for a little more color and volume, I added one sprig. Understated but nice. 🙂

I’m both amazed and delighted over how long wild flowers blossom around here: 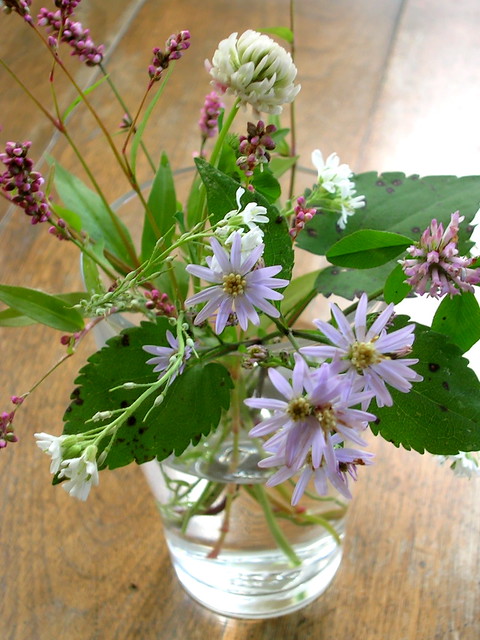 Granted, they’re not terribly flashy like cultivated ones, but they do give bees and other pollinators sustenance long into the fall season and provide splashes of color, too. (We keep our yard purposely toxin-free for the bees.)

As a booklover and librarian, I’m protective of books in good shape. But as a maker, if a book is beyond saving, I’m glad to see it continue its life as crafts materials. Brittany’s project definitely brings together the best of both worlds. Thank you for sharing!

The wild brambles hereabouts start blossoming at the end of May and continue into June.

Understated and yet so pretty.

I happened upon a patch of anemones in the woods last year: 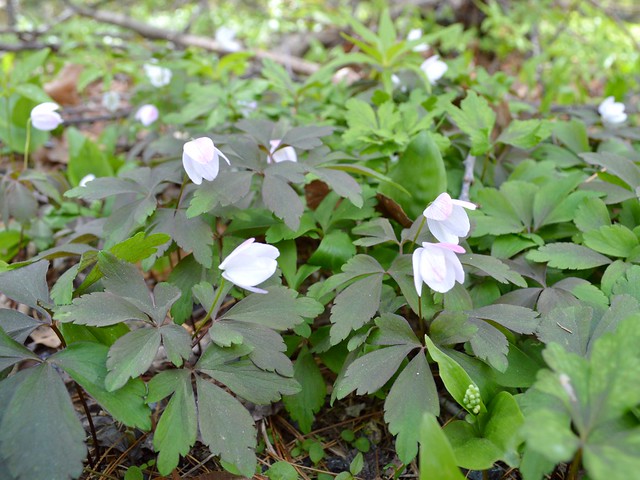 This year they’re back. 🙂 I think they’re wood anemones (Anemone quinquefolia). The dash of pink is charming!

If February felt a warm and spring-y, March 2018 really came in like a lion: in the first half of the month, we had three major winter storms. There was widespread damage both from flooding and snow-laden trees crashing down all over New England. It was very pretty, though:

Husband and I got off easy, all in all – apart from copious snow-shoveling, our immediate area didn’t suffer badly. The only blackout in our neighborhood lasted less than 24 hours, and damage on our street was limited to one downed wire (with no street plowing, however, because the truck couldn’t get past it). Plus some fallen trees in the woods, but that’s normal.

In connection with the International Women’s Day, I discovered letterer, illustrator and designerd Risa Rodil. My tinkerer heart absolutely beats for this poster of Shuri from the movie Black Panther:

“Just because something works doesn’t mean it can’t be improved.”

Speaking of hearts, I’ve been making prototypes of small heart ornaments. So far I’ve only made singletons, but I’m hoping to find a handy way to string them up as a banner.

I was really exited about our spring break trip to visit family in Virginia. For a while I was worried we might not be able to make it – our flight left the morning after one of the major snowstorms. Luckily, the airport was running more or less normally by then. (The crews must’ve pulled an all-nighter – thank you!) It was fantastic to be able to enjoy the warmer weather plus first leaf buds and blossoms in the valleys. 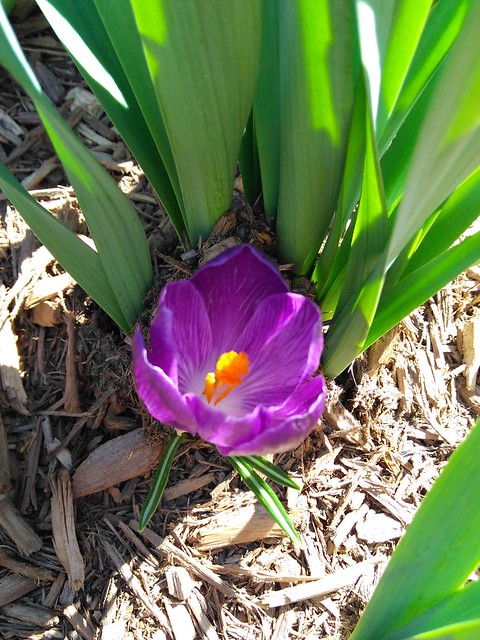 Up in the Blue Ridge Mountains nature was, understandably, not as far along, but the views were still very beautiful. We happened to visit on a clear, bright, sunny day – the vista went on and on!

And while stopping for lunch in Charlottesville, I saw this sticker on a post near the Downtown Mall:

“This is a no go area for all fascists, racists, sexists and homophobes.

“You have been warned!”

It wasn’t even the only anti-bigotry expression we saw. Clearly the city was deeply affected by the death of Heather Heyer in August 2017.

Instead of designing and sewing, most of my mental capacity this month has been derailed into dealing with taxes. I belatedly found an error in my 2016 return, and had of course to check all previous ones to see whether it tracked further than that. The end is in sight, though – almost done with the amendment and the 2017 return!

True to my Finnish roots, I’m taking a few days off to enjoy the midsummer.

The Playfully Grownup Tumblr will keep tumblin’, however, and I will keep an eye on the shop. I’ll resume posting here on Monday 26th.

A wild rose in our neighborhood that’s blossoming for the first time in my memory surprised us with pink flowers! 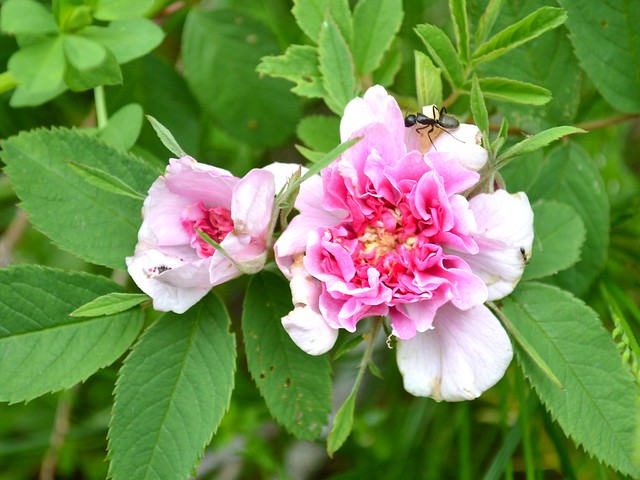 There are plenty of buds, so we’ll be enjoying these roses for a time still. Ahh! 🙂