Take a look at this absolutely brilliant Tardis dress:

May Yet on Tumblr; collage by Eppu Jensen

It was made in 2018 by May Yet for a friend to wear at the Tokyo Comic Con. Sadly, the original post where I found it is now gone, but Yet wrote a new post where they give a bit more info and show new photos.

The dress is so gorgeous you could also wear it for semi-formal, non-geeky events. The absolutely best feature is that IT’S BIGGER ON THE INSIDE! Aaaaah! 😀

It’s a fact that the European / Greater Mediterranean history isn’t as white as western history textbooks and media make it. If you won’t listen to me, listen to Doctor Who played by Peter Capaldi:

Bill: “Regency England, a bit more black than they show in the movies.”

Doctor Who: “So is Jesus. History is a whitewash.”

Doctor Who‘s tenth season seems to be working hard to rescue the series from the preceding slump of mediocrity. This bit of deliciousness comes from the episode “Thin Ice” (s. 10, ep. 3), written by Sarah Dollard. Image via Ninon / amanitacaplan on Tumblr.

I may have to pick up Doctor Who again.

Little Free Libraries aim to increase access to books for children, young people and their families.

This particular little library is certainly taking advantage of Doctor Who mythos!

“The Little TARDIS Library is designed to engage children and young people and is scaled as such, being 1.2 metres high x 600 mm wide.”

Just lovely. 🙂 Best of luck with the tour!

Spotted on Cosplay Couture: what was envisioned as a more Edwardian design turned into a 1920s-30s take on the Seventh Doctor.

“[T]he final result is very different to what I originaly envisioned, though thankfully for the better, I feel. It was originally more Edwardian but when I tried it on, it was quite shapeless. Sometimes things work in an illustration but not in reality. So I restyled it into something with hints of the 1920’s and 30’s. Modelling this costume was easy though, I love having a prop and here I had both the umbrella and the hat. You might also notice the TARDIS key. We were quite fortunate with the locations, this was just a five minute walk from Luke’s house and I don’t think they would look out of place in a McCoy era episode.”

I love how the iconic details of the Seventh Doctor’s outfit, especially the vest, are still recognizeable even if the shape is very different. I’m not a shoe person, but I couldn’t help but notice that the shoes are also a very good match. See:

Sylvester McCoy as the Seventh Doctor. Image via the seventh Doctor page at iaith.tapetrade.net.

Composer and pianist Sonya Belousova and director Tom Grey staged a version of the Doctor Who theme with cosplay:

Sonya not only steps out of the Tardis, we see her play a Tardis-blue grand piano in a multitide of Doctor outfits in just over two minutes. Neat!

So far I haven’t created any products for specific campaigns or themes (apart from my usual business charitable giving). This year, I wanted to do a test batch and chose October and breast cancer awareness.

There are some gorgeous pinks and reds in my fabric stash. I selected a few to make a small quantity of lavender sachets and mini storage cubes. Some sachets are plain, some have a heart applique in the front and some were inspired by the Tardis; all are limited run and sold singly. A part of the sachets are in darker colors – burgundy red and purple – as a nod towards male breast cancer. I also sewed two unique sets of two mini cubes; the rest of the cubes are limited run and sold singly. Here is a group photo:

They are now available in my Etsy store; more photos can be seen on Flickr. Five percent of the proceeds go to Susan G. Komen. It will be interesting to see how a themed set like this performs compared to my usual selection. At the very least it has been educational to think in terms of a specific collection or purpose.

Something Doctor-ish must be in the air this week! First, BBC released the Doctor Who series 8 official full length trailer last Sunday.

Not only that, I ran into this fabulous fan composition: Who Am I? (12th Doctor’s theme by James Jarvis).

It went straight into my geeky playlist! One of the comments called the theme “dark yet mysterious.” I’d add that it has potential for contemplation or reflection, even melancholy. Even though we still don’t know much about this incarnation of the Doctor, it sounds like reflection of the past is the theme (or one of the themes) for season 8. The official trailer gives some clues (at approx. 0:25-0:35) when the Doctor says:

Doctor: I’ve lived for over 2,000 years. I’ve made many mistakes. It’s about time I did something about that.

Jenna Coleman’s hesitant delivery of Clara’s line is brilliant, as are Peter Capaldi’s pensive facial expressions picked for the trailer. James Jarvis’s composition captures the attitude of the trailer very well – try playing the trailer without sound with Jarvis’s theme in the background.

The Hillywood Show is a parody video project by sisters Hilly and Hannah Hindi. Each of their videos features impersonations, song and dance numbers and spoofs of various celebrities or movie / tv characters. Falling down that rabbit hole that is the Internet, I found my way to them through their Doctor Who / Rocky Horror Picture Show crossover-mashup-awesomeness.

In Hilly and Hannah’s own words,

“People assume that a parody is a strict progression of cause to effect, but actually, from a non- linear, non-subjective viewpoint, it’s more like a big video of wibbly-wobbly, Time Warp stuff. Like the TARDIS, The Hillywood Show® makes a production that’s bigger on the inside and showcases David Tennant’s beloved Doctor in a memorable way. Allons-y!”

Without further ado, I give you the Tenth Doctor, brilliantly cosplayed by Hilly Hindi, doing the Time Warp, a parody video by The Hillywood Show:

How come I had never heard of them before? So, so brilliant! Thank you, Hilly and Hannah!

I’m going to take a leaf out of blogger Holly Becker’s book and try photo pairings. Holly started with pictures of some floral fabrics and paired them with photos she thought were a good match to the pattern. I’ll try it with a geeky starting point.

This batch was inspired by Doctor Who. You can’t think of Doctor Who without thinking about certain iconic things like the Tardis… 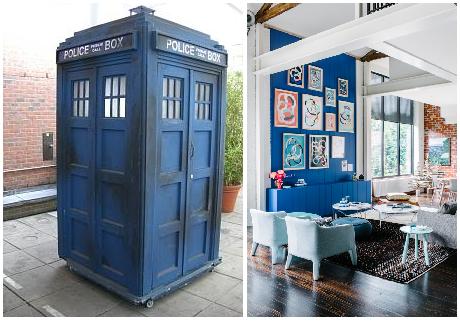 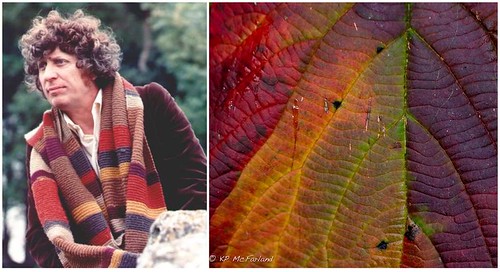 …the other Time Lords… 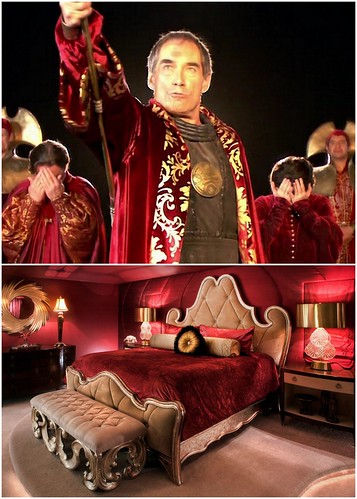 …and Daleks (this one with tongue firmly in cheek):

Here’s a roundup of just some of the free printable geeky Valentines Day cards out there.

Yoda Valentines card by The Inked Leaf / The Dating Divas.