Camille Javal is an artist who creates murals, artwork and jewellery in addition to engaging in design work and photography. I was really struck by “Hello to the Ocean”, one of her murals.

The most amazing thing about it is that not only does it have a range of gorgeous blues and greys, the mural’s mood changes with the light – just like the sea:

Stunning, right? However many times I see these photos I’m still agog.

I recently learned of a new-to-me music style: bardcore.

It means making versions of modern pop / rock songs in the style of medieval ballads. And, oh boy, is there a rabbit hole to fall into!

Another neat bardcore version of a song from Finland, this one a trad: “Ievan polkka”.

Sadly, some are merely badly rendered synthesizer versions. When you do hit gold, though, it’s really good!

Below are other bardcore versions that tickled my fancy. (I saved the best for last, so keep scrolling!)

We Will Rock You [Bardcore] by Graywyck on YouTube

Surprisingly, also the theme for X-Files works quite well:

The X-Files (Medieval Cover) by Middle Ages on YouTube

Hildegard von Blingin’ is by far the best, most dedicated bardcorer (if that’s what they’re called) I’ve found so far.

Hers are made from brass tubing and leather thongs for durability. I like the updated materials! I’m not so sure about the modern shapes, though – I’m fond of this particular Finnish tradition, but I do realize turning a traditionally-shaped himmeli into a planter would be very difficult (see some examples in a past post of mine).

Visit Mandi’s blog for the video tutorial in stop-motion.

Estonian architect Allan Strus uses historical styles as springboard in his building designs. Filled with modern features like triple-glazed windows plus high-quality insulation and soundproofing, his houses nevertheless charmingly nod towards earlier styles like Jugend and Neoclassicism. Other contemporary features in his buildings include French balconies, underground parking structures or roof terraces.

“We believe that built environment should enrich the environment surrounding us, harmonize with it, depart from local customs and traditions instead of shocking the observer. We also think that buildings should tell their users and watchers about their essence and birth as well as about their owners. We hold that buildings and entire built environment should be beautiful and elegant, not ostentatious and arrogant. We hold that harmony and beauty of buildings must be clearly understood also when we are gone, not only in the perspective of a short-time trend. We are convinced that buildings must be physically and visually solid and durable, that they must certainly last longer than for one human generation, because this is the only way to restate the consistency and transmission of man-made values from one preceding generation to the following. […]

“Therefore we depart from traditional and classical architecture and try to combine it with local customs, circumstances and specific requirements as well as with latest technology. We believe in consistency of traditions and vitality of classical values precisely because they are essentially not derived from trends but stem from technical, logical and aesthetic solutions-tectonics- formulated by centuries long experience of mankind and easily adjust to changing needs and demands of a specific period.“

As Jugend is one of my favorite building styles, I love Strus’s work a lot. The proportions of his buildings are more pleasing than those of later styles like modernism or functionalism. (Some of them ping my Jane Austen radar, too; or at least remind me of what I associate with Regency period building styles.) I wish his approach were already more widely known, for the work is so very beautiful, balanced and harmonious.

“What’s remarkable is the way ‘nerd’ is such a badge of honor now. Growing up, I’m sure I wasn’t the only kid who read Spider-Man comics and learned how to do the Vulcan salute, but it wasn’t like it is today. I get the sense that today’s young people are proud to be smart and curious, to design new things, and tackle big problems in unexpected ways. I think America’s a nerdier country than it was when I was a kid—and that’s a good thing!”

Smart and curious people designing new things and tackling big problems is exactly what’s needed at the moment. Proud of my fellow geeks and nerds!

Do you remember the exoplanet retro-style travel posters I blogged about last year? Now there’s more of them! NASA’s Jet Propulsion Laboratory has released a series of 14 posters:

“Nine artists, designers, and illustrators were involved in designing the 14 posters, which are the result of many brainstorming sessions with JPL scientists, engineers, and expert communicators. Each poster went through a number of concepts and revisions, and each was made better with feedback from the JPL experts.”

Aren’t they just fantastic? They’d make a great wall art, especially if hung in a large grouping. Many of them also remind me of book covers.

They are made and sold by Zuzia Kozerska at Valek Rolling Pins on Etsy. Kozerska uses a laser engraver to create the patterns. She offers a variety of patterns from historically inspired to folk to geometric. Some of the geekier motifs include ghosts, dinosaurs and robots. And this reindeer roller immediately reminded me of the House of Baratheon sigil in Game of Thrones:

The designs must take a good white to create, not to mention transfer to the laser engraver. Impressive job!

Creative Director and artist Matt Stevenson shared his designs for World of Warcraft classes / specs imagined as real-world commercial brands. Wow! I’m seriously impressed not just by the top-notch designs, but by the imaginary products the brands have been applied to. Here are a few of the best, IMO:

Found via BlizzardWatch. Stevenson also designed a retro-feel set of minimalist WoW class posters (available for sale on Etsy). My favorite is the balance druid poster: 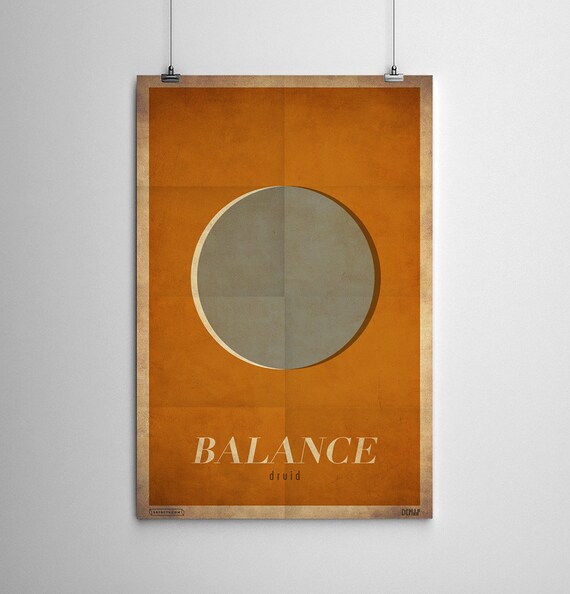 Very nice work! Check out his business website at dcmjs.com.

So cool! They’ve also included little snippets of information on each planet in the poster write-ups. The images are available for download in high resolution from JPL’s website! (Make sure you check their Image Use Policy, too.)