The Saguaro hotel in Palm Springs, CA, is unapologetically awash in bright rainbow colors. Its bold look was designed by Stamberg Aferiat + Associates, a New York based architecture and design firm.

Amazing, isn’t it? I really dislike the boxy, brutalist concrete modernism, but I see now how color can make a huge difference in how that kind of architecture can feel. And when you run into design that can change how you think about something, that’s how you know it’s great design. 🙂

Eileen and her husband Ash, who blog at Just Measuring Up, did a fantastic rainbow ombre wall art project with craft paints and a stencil of the world map:

Ash and Eileen at Just Measuring Up

And here is their project hung up:

Ash and Eileen at Just Measuring Up

In addition to giving you the how-to, Eileen also lists 6 other ideas for filling up a blank wall. Visit their site for a look!

Allison at Dream a Little Bigger came up with an ingenious way to make abstract art – with cooking oil and gel food colors:

Allison at Dream a Little Bigger

Her point was to use something she already had. Can you believe the resist patterns were done with canola oil?

Allison at Dream a Little Bigger

Very nice! Apparently the colors change a little as the paper dries, but it looks so vibrant either way. I wonder whether you might be able to do wrapping paper with this technique?

Visit Allison’s tutorial at Dream a Little Bigger for more photos and a how-to.

Many people in my social bubble have turned to handcrafts during the covid-19 pandemic as a way to pass the time and provide comfort. I’ve seen such a wide spread of projects and patterns and inspiration as a consequence, and enjoyed every one. Here’s a project of my own.

I’ll share what I thought would be a quick photo frame refresher but turned out to be anything but. The results are worth the effort, though, so all’s well that ends well. 🙂

I wanted to make over two older, uber-cheap 5”x7” wooden photo frames. They’re made from pine (I think) that had yellowed over the years, and I was quite tired of the darkened wood. I’ll first give the short version and the before and after photos, and after that the full saga. 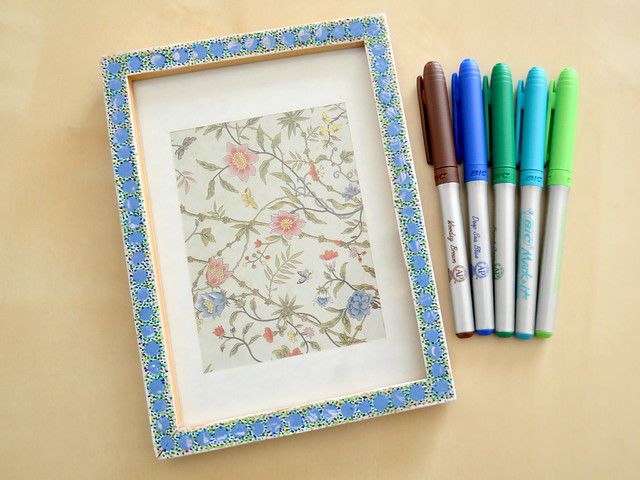 Apparently I didn’t take a before photo, but here’s a photo of similar untreated frames:

The only difference is my frames were much more yellowed. (Oh, boy, how much more!) Here’s a frame in the middle of the transformation:

I originally intended to try whitewaxing the frames. It’s a new-to-me technique I found via Cami at Tidbits. (I like her clear tutorial and whitewaxing projects; please visit her site if interested.)

However, I accidentally bought clear wax instead of white. (I worked on this just before and during some of the worst covid-19 panic in Massachusetts; I guess I had a coronabrain on.) Even while working on the frames I didn’t notice, because the clear wax looks white in the jar. Only after applying a couple of layers did I start wondering why the frames don’t seem to be gaining the lovely transparent white surface I expected… D’oh!

After some thought and more research I tried adding white acrylic crafts paint into the wax and wiping that on with a rag. Either I didn’t mix it properly or the rag wasn’t the best tool, for the surface came out quite uneven. You can see some of the effect in the photo above. However, it was much closer to what I had envisioned.

Perhaps I should’ve left well enough alone – indeed, in hindsight I think I would be quite happy with the improvised faux white wax – but at the time I was disappointed and wanted something else to “improve” the frames. I had an idea of trying to mimic nailhead trim with paint.

I used an eraser at the end of a pencil and blue acrylic paint. Unfortunately, that made it worse. I’ve never been a polka dot person, and apparently this faux nailhead trim is close enough not to appeal to me. Plus, the eraser was a bit difficult to load with paint and use, even though I started with a clear expectation that the result wouldn’t necessarily be very even.

At this point I had to set the frames aside and chew the matter some more. Eventually, while looking for something else, I ran into two permanent marker tutorials. One is by Jessica from Cutesy Crafts (posted at DIY Candy), and the other by Tasha at Kaleidoscope Living. Both used letter stickers to mask off an area and applied small permanent marker dots all around them, spaced very tight close to the stickers, and wider and wider apart the further you went.

Bingo! I adapted the idea and used markers in five different colors. First I had to make a few dry runs on paper to see what kind of dot distancing and which color combinations I liked best.

I ended up starting with a few small brown spots here and there (maybe 4-8 in an inch of frame). Then I added dark blue and green dots, increasing the density slightly. Next, a few more spots of turquoise. Finally, I filled almost all remaining gaps between the blue “nailhead trim” and the rest of the marker dots with lime green.

Here’s the after photo again: 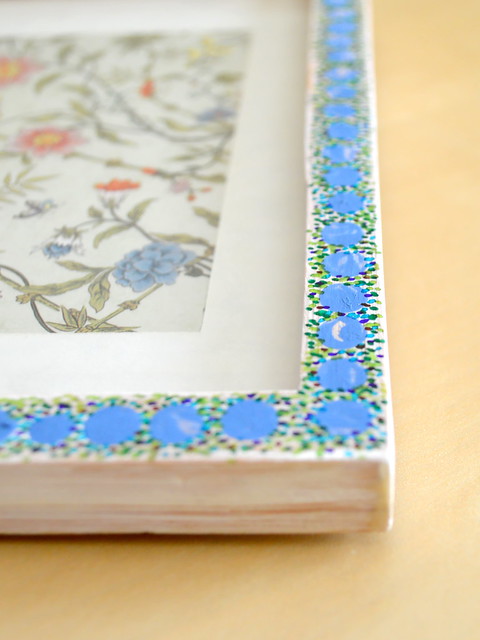 And only very, very belatedly did I notice that I completely forgot to wax-treat the inner edge of the frame, the one closest to the photo. Fortunately at that point I was able just to laugh at my poor coronabrain project!

And it actually doesn’t look that odd in the end. Live and learn! After all of the rigamarole, I was definitely able to earn a number of experience points from this project.

Do you remember the eye-catching arrangement of round velvet pillows on a sofa I blogged about earlier? Here’s an almost identical one, but with the more typical square pillows:

From the home of Kate Pearce and her husband Billy in New York state, featured at design*sponge.

Remarkably, like the previous arrangement I shared, these pillows are also made from velvet. One of them is also embellished with huge tassels – I’m not sure it’s needed since the whole is so striking, but they do draw the eye further in. And isn’t that dark green velvet sofa scrumptious?! Yum! 🙂

Visit design*sponge for more photos. Make sure to see the sunroom floral rug – another gorgeous choice!

These nerdy pencils made me laugh, starting with “Brains are the new black”!

The pencils come with a catchphrase, each on its own color ranging from black via blues to white:

LOL! 😀 From NewtonAndTheApple on Etsy.

It’s apparently made with liquid fabric dye, but I guess you could achieve a similar look with paints and a brush.

I have two larger baskets that could use a refresher, and Kara’s project has finally given me inspiration to jump into it! It’ll be different, though, for instead of a fabric embellishment, my baskets have pebble inserts. I’ll share the results when I’ve finished; it’ll soon be warm enough to paint on the back deck. 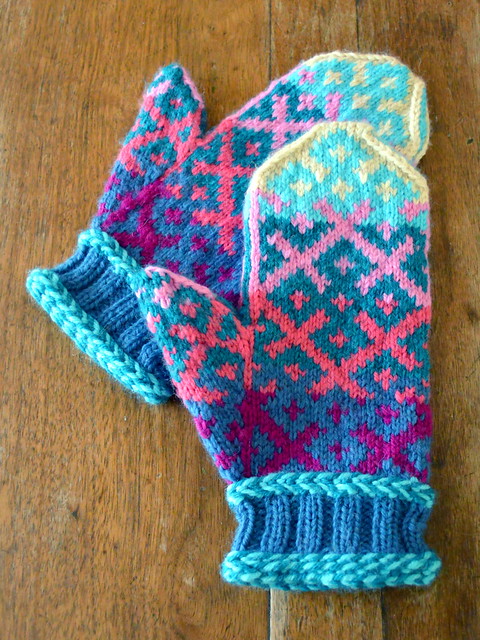 What lovely felt wreaths these are:

I really love both versions – they combine the different shades so thoughtfully. And Cyna even provides a file for a precision cutting machine AND a pdf template for hand-cutting, plus measurements both in inches and metric.

Tutorial by Cyna at Country Hill Cottage. Lovely job, and thank you for sharing!

Next week I think I’ll post about a small wreath with pompom accent I made last year. Time to dig it and the rest of our Christmas decorations out of storage! *<:)

It’s time to update my planning calendar for 2020. In fact, I’m running a little late on this, and my collection of notepapers with scribbles is getting out of hand… Thankfully, Julia Groves has updated her lovely watercolor designs.

I just should’ve remembered to click the ink-saving option off when printing. Ohwell. 🙂

Thank you for sharing, Julia!