Hello again, all! What a summer it was here; how was yours?

As it seems now – I’m cautiously hoping! – that this blog’s stalker-follower is gone, I’m going to start blogging again.

It was a very strange, very stressful situation, as I’m sure anyone who has had to deal with prolonged uncertainty can guess.

How will I go forward from here? I confess that I’m not entirely sure. I’d like to keep more or less the same blogging schedule as before: two posts a week, Mondays and Thursdays, with an odd post here and there when I feel like it, and no posting on selected holiday or vacation days.

However, an entirely unexpected, unrelated, huge project came my way in July, and I’ve been very busy with it since. I’m hoping it won’t influence my blogging, but we’ll see.

If you have thoughts about what you’d like to hear or how often, please let me know!

One of the new things I started at the beginning of 2018 is a month-end recap, a sort of newsletter light. Now I’ve completed the cycle with the first recap for 2019. Yay! 🙂

Speaking of cycles, tax time is rolling around again. I’ve been bogged down with tax prep more than usual at this time of the year.

Unfortunately, Etsy changed the way they bill and pay their sellers at the end of last year. The new system has had some glitches which have increased my bookkeeping workload significantly. I can’t wait to be done with the 2018 number crunching and get onto the tax forms themselves because it’ll feel so much easier – something I never, ever, thought I’d say!

Just past mid-January there was a snowstorm, the first snowfall for the year. Then a front of warm weather with rain pushed through and melted almost all of the snow. It was very pretty for all of four days!

One night right after the snow, we had someone scamper across our yard. 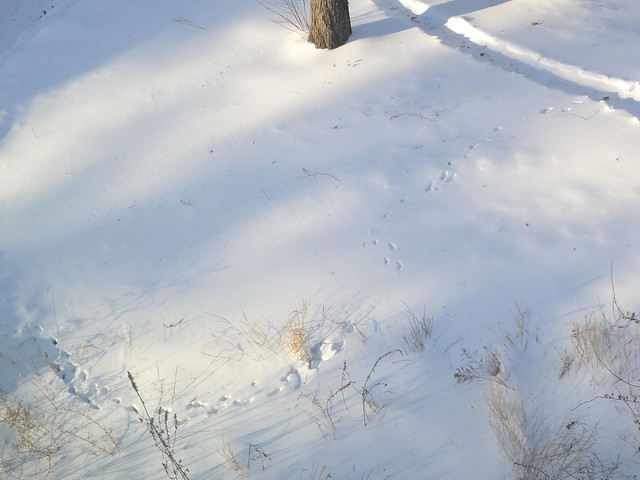 There’s a funny gap in the tracks (in the middle of the photo), though, which makes me wonder whether it might be a sign of a fox jumping to try and catch a critter under the snow. Like in the gif below (but probably much less showy).

I had a small but very satisfying reading pile this month: 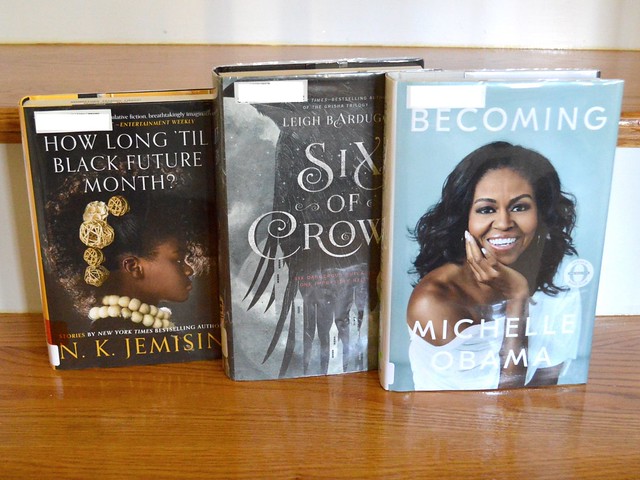 From left to right, How Long ‘Til Black Future Month? by my favorite living author Nora Jemisin, Six of Crows by Leigh Bardugo, and Michelle Obama’s autobiography Becoming. I also read Ariah by R.B. Sanders and Zero Sum Game by S.L. Huang. I’m looking forward to the last two Murderbot novellas, too, which I got as Christmas present. Yay, so many great reads!

On the screen, Husband and I were introduced to the tv series Modern Family by a friend. It’s a mocumentary of three generations of a Californian family. We’re bingeing through the seasons and have gotten up to seven, and are still enjoying it.

My goodness, I never would’ve thought that I’d find a mainstream (i.e., non-genre) family drama interesting, but I do. 🙂 Shows you what production values can do – specificially in this case, attention to quality character-writing and episode structure.

Now that I’ve written a full year’s worth of recap posts, it’s time to reassess. Even though it felt difficult at times, I certainly learned a lot and found that I do like an end-of-the-month look back.

I’m inclined to continue these newsletters, but I might dink around with the topics or proportions. Would you like to read more about something or maybe less about something else? Please let me know!

Etsy has been busy improving both the backend processes for sellers and the searching and checkout experience for buyers.

Here are a few new features I’ve found helpful and promising both as a seller and a customer.

In other business-related news: in January I reduced my Playfully Grownup Tumblr posting down to three times a week. I had meant it as a temporary measure, but I found the impact so beneficial to my workflow that I’ve made the change permanent. In addition, posting every other day feels less disruptive from the reader’s point of view than four days in a row plus a long weekend. What do you think?

As any creative knows, self-promotion is hard. Really, really hard. And most likely you signed up for your creative job specifically for the creative part, not necessarily realizing that self-promotion is a part and parcel of that job. I know I did – rather, I thought I knew about the challenges of the promo aspect, but the reality, as they say, has a way of sneaking up on you.

While being excited to share your work with the world is understandable – it’s a product of hard work you’re proud of, after all – it’s easy to lose yourself in the promotional whirl. I can think of nothing worse than to inadvertently cross the fine line from sharing your excitement to unsolicited pestering. In fact, I dread it. Like author Delilah S. Dawson says about self-promo:

“…[I]f you do certain annoying behaviors, you’re shooting yourself in the foot and actively repelling people instead of interesting them.”

The equation often feels impossible. I have marketing needs and goals. I need to get out certain information like holiday schedules or rising shipping costs. I also want to let people know about new arrivals in my shop, like the breast cancer awareness items I made in 2014. Achieving those needs and goals seems opposed to the way I want to promote my business, though. I fear becoming yet another spammer, barging uninvited into other peoples’ spaces with my Exciting!! opportunity to purchase my new Exciting!! thing right at this Exciting!! moment. Also, I can’t have my blog to turn into a boring, soulless infomercial channel; I couldn’t stand that myself.

Short, informative explanations of these ratios (and more) can be found by Kevan Lee on Buffer.

On the basis of these numbers, I could increase my self-promo posting. I have, in fact, been thinking of writing the stories of how some of my items came to be, from the idea to design to prototypes and making the final products. They take a lot of time and effort, though, so before deciding, I need to have some idea of whether it’s worth spending that time writing or whether it would be better to design and sew instead.

What do you think – too much or too little as it is? More pictures? More text? Or more of the general Behind the Scenes posts on running a small creative business? Let me know what interests you!

Bad puns with Iron Man references aside, I want to share my newest online project. Co-Geeking is a blog which I co-write with Husband, a home for our unabashedly geeky interests. We’ve been rolling our first posts out slowly and quietly over the summer, but we’re ready to shine more light on it.

We’ll share inspiring visuals, fun tidbits, silly quizzes, our thoughts on writing, stories and characters, and such. However, the biggest single feature is History for Writers, in which Husband applies his trade as an ancient historian to his love of storytelling. 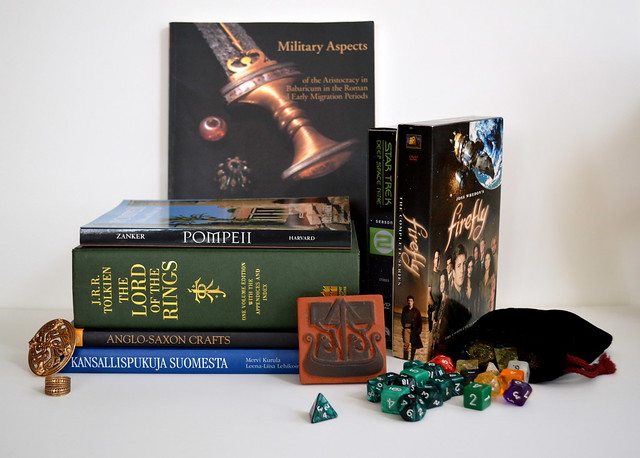 An attempt at making a header for the new blog with just some of our interests.

For me, Co-Geeking is about three things. Firstly, it’s about sharing the stuff we love not only with each other but with others outside our immediate circle. I hope that we’ll get to talk with people we know in person or online who live in (drastically) different time zones, and that we’ll form new connections and friendships. I also want a place to share things that don’t fit well with the PGH focus.

Secondly, Co-Geeking is about highlighting the fact that geeks come in all configurations. I am no less a geek than Husband even though he bears the physical topography that’s currently more valued in this country and I don’t – and neither is someone who is of a different color, language group or culture than the two of us (white / Finnish and American). Nor is geekiness dependent on what you do or don’t like. Whether you’re into SCA, LARP, cosplay, tabletop games, card games, MMOs irrespective of flavor, anime, comics, superheroes in all and every medium, speculative literature in general or transwoman-authored science fiction about sentient carrot seedling soldiers from the debris disk of Tau Ceti, there is space for us all in fandom. A respectful discussion among various points of view enriches us all, and that’s what I want out of Co-Geeking.

Lastly, geekiness is not necessarily something you’ll grow out of, nor should you. In mainstream media, geeks are mostly stereotyped as teenagers or young adults, and men to boot, but we all know that’s not true and never has been. Husband and I are approaching / into our middle age now, still geeking strong, not about to quit, and we’re no less responsible adults than our neighbors just because we root for Groot and not the Patriots. I’ve decided to be more public about my geekiness to help dispell those annoying stereotypes.

The changes for the PGH blog will be minor. Here I will concentrate more heavily on textiles, textile history, sewing, homes, home projects, crafts and visuals, while I’ll try to keep Co-Geeking more story- and hard-materials-projects oriented. There will be overlap to some extent nevertheless, because variety is the salt of life.

We’re very excited about and hope you’ll join us at Co-Geeking! 🙂

This blog already has 10 followers, to my surprise:

Exciting, right? Unfortunately, I seem to have been hit with “follower spam” already: most of these people are advertizing something. You could almost make their “pitches” into a pseudo-conversation:

It’s a little demoralizing – I am writing with an actual person in mind, not a sales drone who’s fishing for clicks or followers. We already have the Do Not Call list to block unsolicited sales calls and spam filters to block unsolicited marketing e-mails. I wonder when the blogging industry will catch up.

For the real people who follow: Thank you. I have no doubt you’ll get company in time.