We were lucky and despite the dry-as-bones end of June got to enjoy the first raspberries from our bushes during the Fourth of July weekend. 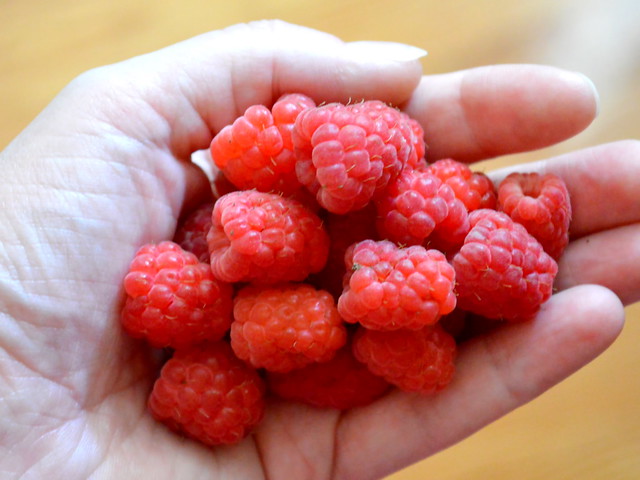 Thanks, nature. They were delicious!

The Japanese tea company Ocean Tea Bag has taken tea bag design to a whole new level. Their models include intricate animal shapes from hammerheads, giant squids and cephalopods to turtles, kitties and red pandas. My favorite is this cute otter…

…although the frogs are a close second:

But here’s the question: would you want to use up such gorgeous tea bags?

My Modern Met shared some amazing buttercream cake toppers in an article. They are the work of Leslie Vigil, California-based artist and cake maker. And they are. So. Beautiful! All of them!

Among the most interesting to me were these three toppers that include embroidery-like elements:

There are also a few explicitly geeky ones, like this Groot cake:

Visit the My Modern Met article and Vigil’s Instagram for more – there are so many designs to love! Almost makes me wish I were in California, too. Then again, I’m sure my doctor would be much happier if I were to stay away, far away, from cakes. 🙂 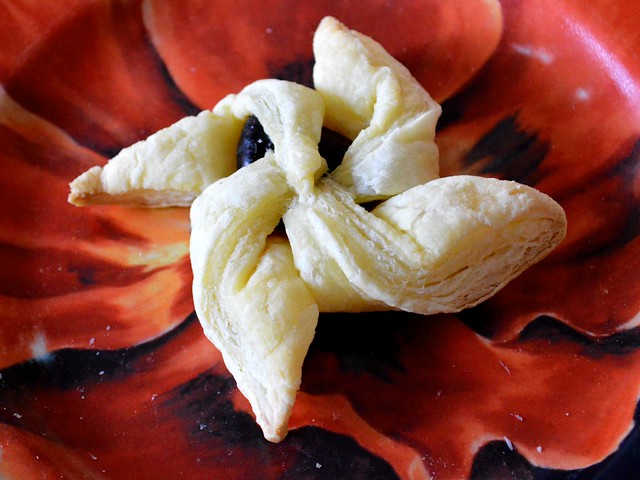 Back in the day when you had to make the puff pastry from scratch they must’ve taken a good while to produce. These days, with store-bought puff pastry, they really are a cinch to make:

Since I haven’t found plum jam in stores here, I’ve developed a super-duper easy way: I soak prunes in hot water until soft (approx. as long as the pastry takes to thaw) and use them to fill the tartlet, one prune per square. I also use toothpicks to skewer through both the pinwheel corners and prune in the center so that the tartlet won’t open while baking (the tips will burn easily if they do). And since I’m not terribly fond of confectioners sugar, I usually skip it.

While flipping through a back issue of Country Living magazine, I spotted the very same pastries except with a summery filling: jam and cream cheese.

Country Living magazine gives credit for these jam and cream cheese versions to Kayley McCabe; visit the post at Handmade Charlotte for her writeup and tips.

They sound absolutely delicious – I’ll have to try some time!

Due to various dietary restrictions (some old, some new), we’re trying out different versions of old favorites and recipes completely new to us. This means food experiments! Here’s Husband’s latest: popcorn nachos. 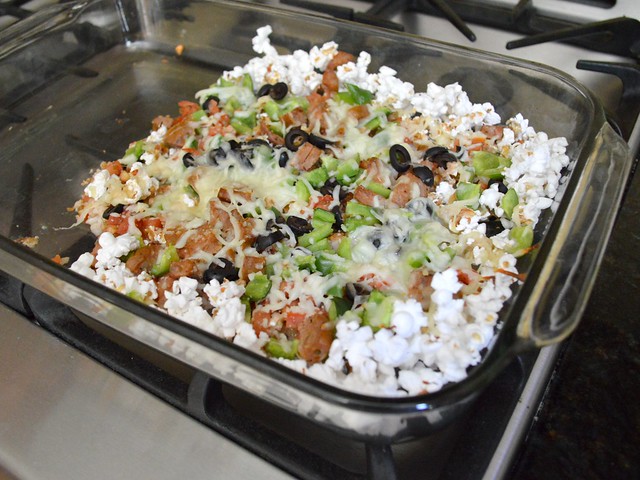 It works surprisingly well, even if the result is a bit crumbly. As long as you’re using a fork, it’s fine.

You don’t need a recipe as such, but here’s the how-to:

Did you try it? What did you think?

What’s a summer without strawberry cake? 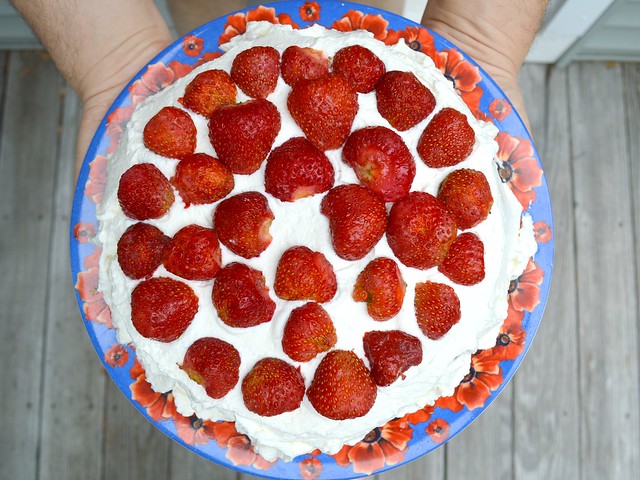 There’s something special about having a cake from fresh, local berries. As the first berries of the season, strawberries are extra special. Thank you, Hubby, for baking Finnish-style cakes!

Usually we’re not ready for Christmas by the time December rolls around, but this year has been different. We sung our first carol – in Finnish, for which I give full props to Husband! – at the end of October. I pulled out the ornaments before Thanksgiving, and Husband brought home the first Christmas foods just afterwards.

I really like my Finnish Christmas food. When Husband and I got married, we had to fit our respective customs together into a combination that included both of our favorites. Fortunately that turned out very easy, because his New England family traditions and my Finnish ones are quite similar. Instead of turkey and cranberry, we make ham and prunes with various sides. They tend to vary from year to year, but always include some form of potato. 🙂

And the desserts! We decided to include a small amount of a wide variety, so there’s space for both traditions. When I can’t get Finnish gingerbread cookies, I’ll choose the Swedish brand Annas pepparkakor. We’re also stuffing ourself with clementines. 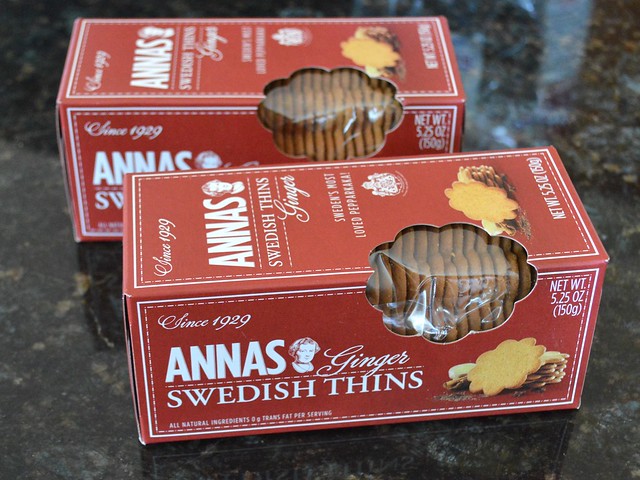 I’ve really grown to like eggnog a lot. Due to my lactose intolerance, we tend to look for non-dairy alternatives, though. This new-to-us nog turned out pretty yummy.

I like the fact that this one is only lightly sweetened – the only place I prefer lots of sugar is in my alcohol – but I felt it lacked some creaminess. Quite nice, however, especially with a splash of vanilla soy milk. 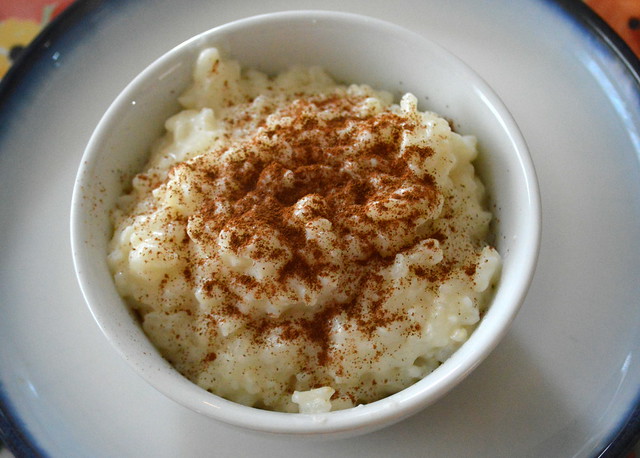 What are your favorite end-of-year holiday foods?

We do Halloween in a very minimal way in our house. I do, however, love seeing what creative decorations and tips other people have shared. This year, Claire’s gilded cookies top it all:

Claire at The Simple Sweet Life.

How elegant! And such detail – wow. Learn more from the tutorial by Claire at The Simple Sweet Life.

By accident, at my local library I ran into a maritime Massachusetts cookbook, In Cod We Trust by Heather Atwood. I was very surprised to find several references to Finns in it. I know immigrants from Finland settled in various places around New England and the Midwest in the late 1800s and early 1900s, but I had assumed that their numbers in Massachusetts were nowhere large enough to make a lasting impression. Lo and behold, I was quite wrong!

Here’s a Finnish blueberry soup recipe from West Barnstable, Massachusetts, according to Atwood:

“Bring water to a boil in a saucepan and add blueberries, sugar, mace, cinnamon, and salt. Add arrowroot (or cornstarch) to cold water, and mix into a smooth paste. When the berries have cooked about 10 minutes, slowly stir the arrowroot mixture into the boiling soup. Cook 2 minutes more, or until thick. Add port. Remove the cinnamon stick. Serve warm as is, or chilled, with a dollop of yogurt or whipped cream on top. Again, this is also delicious served over warm rice pudding.”

Sounds both familiar and unfamiliar, for the everyday recipes I grew up with don’t have port or spices, just sugar and the berries. Around Christmastime you might make a soup out of dried fruit and/or berries, or a fruit medley, and include a Christmasy mix of spices in that. Berry soups of various kinds taste very good on cold rice pudding, too, and make a nice snack even on their own. Also, traditionally we use wild berries, not the cultivated ones, but I find that which kind to choose is merely a question of preference.

To compare, here’s a berry soup recipe I learned in home ec class:

Bring the water to a boil. Add the berry mash or juice and sugar and cook for about five minutes. Do not overcook. Blend the starch and cold water into a smooth paste. Lift the pot from heat and slowly stir the starch mixture into the berry water, mixing thoroughly while pouring. Return the pot to heat and cook, stirring occasionally, until a few bubbles rise to the surface (soup shoud be clear and thick).

Pour fresh or frozen berries into the serving dish. Pour soup on top of the berries and sprinkle with sugar to discourage a skim from forming. Chill and serve. (If a skim does form on the surface, just stir it back into the liquid.)

You can substitute corn starch for potato starch, or whatever is commonly used in your cooking culture to thicken liquids that doesn’t have a strong taste of its own. Also, by adding or subtracting starch, it’s easy to adjust the thickness of the soup to desired consistency. Thick, rich soups take 4-5 tablespoons and lighter soups 2-3 tablespoons per quart / liter of liquid.

P.S. We used a variant of this very same berry soup in our Lord of the Rings dinner project.

A sour cream pie made with our first raspberries! Berry pies with sour cream are quite popular back home in Finland, and very summery.

Here’s my favorite recipe converted into American measurements from metric.

Preheat oven to 350 F / 175 C. Cream together the butter and sugar. Add the baking powder and then flour a little at a time, mixing well in between. Add the water last. Mix gently. The crust should be a little flakey, not elastic like bread dough.

Pat evenly on the sides and bottom of a 9” pie plate with well-floured hands. Spread berries evenly on the crust. The berries should fill the crust but not overcrowd it; a few gaps are fine.

In a bowl, mix together the sour cream and sugar. Add egg and mix. Pour on top of berries.

Place pie plate on a baking sheet lined with foil or parchment paper in case of spills. Bake for approx. 45 minutes or until slightly browned at the edges.

Tastes best when cooled and keeps well in the fridge for up to a week.