As Massachusetts covid-19 recovery progressed nicely, we moved into phase 3 of reopening in mid-July. Due to our town’s guidance, the local library cannot yet open for browsing, but curbside pickups have been increased and the interlibrary loans are operating again. That’s awesome!

Sadly, due to the 4th of July holiday, people were apparently getting together, and we’re seeing the increased statistics now. I’m kinda dreading the next three or four weeks, since we’ve had a couple of heat waves recently that reportedly (for I wasn’t anywhere near them for sure!) drove people to beaches in large numbers without proper precautions in place… Egad! The virus hasn’t gone anywhere, nor is it likely to any time soon if this kind of irresponsible behavior goes on.

With regard to Playfully Grownup Home on Etsy, I’ve had some time off since summer is always a slow season. Lately, though, I’ve pondered on having a Back to School sale, but that just feels crass at best, cruel at worst. What would you say about a Getting Ready for the Fall sale instead?

Husband and I painted half of a bathroom and are currently in the middle of painting another one. Next month we’re scheduled to paint a wall in the kitchen, so we’re definitely staying busy and safe at home.

We haven’t seen many wild turkeys this year, but apparently there are a few around.

These two turkey mamas may have joined forces with another one since this photo was taken, for one day we saw a gaggle of three adults with eight chicks.

And, oh my goodness! Our resident chipmunk really loves sitting on the gastank lid, either observing the nature around, or just loafing, or scritching itself thoroughly, or eating. But this – I have no idea what’s going on here! 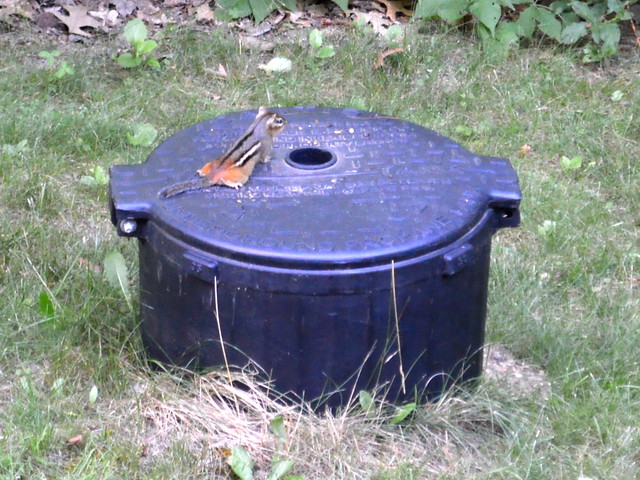 It sat like that for minutes, so the pose wasn’t a part of a quick stretch or anything.

An interesting viewing project Husband and I did was to go through the whole of the U.S. Civil War documentary by Ken Burns, and added to it a number of both fictional and documentary films on President Lincoln. Funnily enough, it all started after I found our library had a copy of the movie Abraham Lincoln: Vampire Hunter. (It was, as expected, not great, but still surprisingly good for a bad movie.)

Speaking of the library, I’ve also gotten a delightful amound of reading done. The loveliest read this month was Aditi Khorana’s standalone fantasy novel The Library of Fates in an Alexander-the-Great-meets-India -inspired world. Highly recommended!

As always, be considerate. Wash your hands. Wear your masks. Stay safe. ❤