I was browsing my WoW screencaps for something entirely different when my eye fell on two shots from the Dalaran inscription trainer’s place. (This is in the Legion version of Dalaran.) Both are actually from inside the book-filled cupola: the first looks up towards the impossibly high ceiling, the second down towards the trainers’ room floor.

Screencap from the Dalaran inscription trainer’s place in World of Warcraft.

Screencap from the Dalaran inscription trainer’s place in World of Warcraft.

Neat, right? Well, I wondered whether anyone’s actually done anything similar for real and hit the Internet. And I found some!

The functionalist stadsbibliotek was designed by Gunnar Asplund and opened in 1928.

Round Reading Room in the Maughan Library, King’s College London in London, UK

The Round Reading Room of Maughan Library, the main university library of King’s College London, can be found on the Strand Campus.

The Picton Reading Room, completed in 1879, is now part of the Liverpool Central Library. 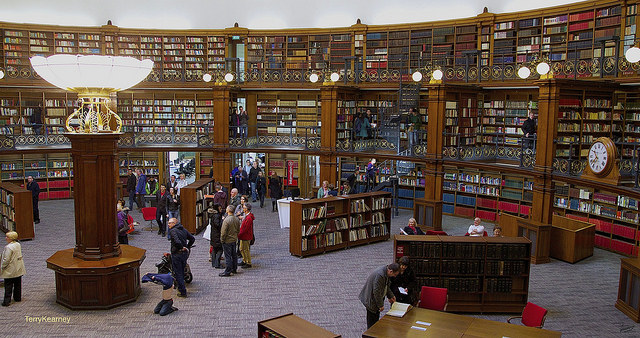 A home in Toronto, Ontario

Designed by Katherine Newman and Peter Cebulak, this two-level library is in a private residence in Toronto, Ontario, Canada.

The library is situated in the neo-Gothic Morrice Hall building that previously housed the Presbyterian College of Montreal from 1871 to 1961.

None of them are exactly the same as the game library cupola, of course: apart from the the scale of the rooms, the scale and direction of the bookcases might differ. But apparently it isn’t terribly far-fetched to make a round multi-storey library and pack it chock-full. 😀