For some years now, I’ve kept a tally of the books I read. In earlier years, I’ve blogged about a gender-breakdown on my reading. While interesting, it’s starting to get monotonous. Time to try something else!

As I started 2017 recuperating from an operation, I decided to focus on self-care all year. Among other things, it meant listening to myself more carefully than before and stopping when I began to feel wiped out instead of gritting my teeth and pushing through. I consciously made time for pleasurable activities (like reading) both indoors and outdoors. I’m glad to say my efforts paid off: my health and energy levels have improved noticeably. And yes, I have numbers to back it up. 🙂

Anyway, back to books. Here, alphabetically by title, are the nine most memorable stories I (re)read in 2017. 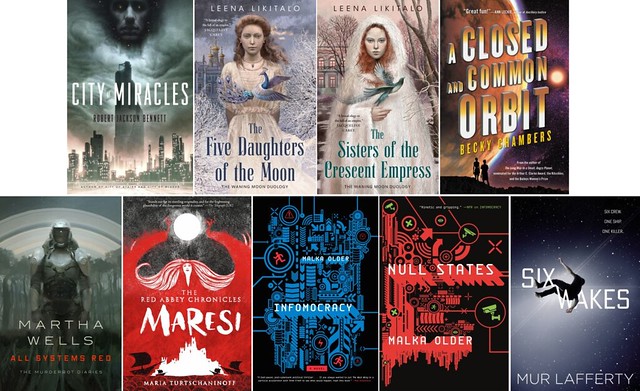 All Systems Red: The Murderbot Diaries by Martha Wells

I resisted picking up this novella because of the name Murderbot, but I’m really glad I did. A self-aware, self-named, part-synthetic, part-organic grumpy SecUnit bot reflects on personhood and solves a mystery involving sabotage and incomplete data. Also, first person POV that works really well. Looking forward to more in the series!

The final novel in the Divine Cities trilogy with action, philosophy and politics plus gripping characters and fates. While I didn’t care that much about the two preceding books, I actually felt genuinely sad at the end of CoM.

A Closed and Common Orbit by Becky Chambers

Sequel to The Long Way to a Small Angry Planet but works as a standalone. We focus on Pepper and the AI Lovelace and learn more about Pepper’s past (as a genetically modified child slave) in a story that is at least optimistic if not outright happy. Love it as much as Angry Planet; looking forward to July and Record of a Spaceborn Few.

Inspired by the 1917 Russian revolution and the last months of the Romanov sisters, together these novels make up the Waning Moon duology. Beautiful, creepy and haunting all at once. Likitalo is a fellow Finn.

Two first installations in the Centenal Cycle trilogy about microdemocracy, a fascinating idea. Looking forward to September and State Tectonics.

Another fellow Finn. The Red Abbey welcomes a new arrival whose past unfortunately brings problems for all the inhabitants of the island. I enjoyed it so much I read it twice AND dragged with me to Finland to Worldcon 75 to be autographed. I’ve also already bought the sequel, Naondel, but haven’t gotten to it yet.

A murder mystery in space, with clones who cannot remember their previous lives. Awesome unveiling of the plot, characters and timelines.

What did you read last year that was special?