The last but certainly not least in our Jane Austen rewatch, Persuasion is a novel of pressures, choices and second chances, posthumously published in 1817. The heroine, 27-year-old Anne Elliot, has never come to terms with her refusal to marry the great love of her life due to the prudent advice of a friend in loco parentis. The he returns to the neighborhood 8 years later… 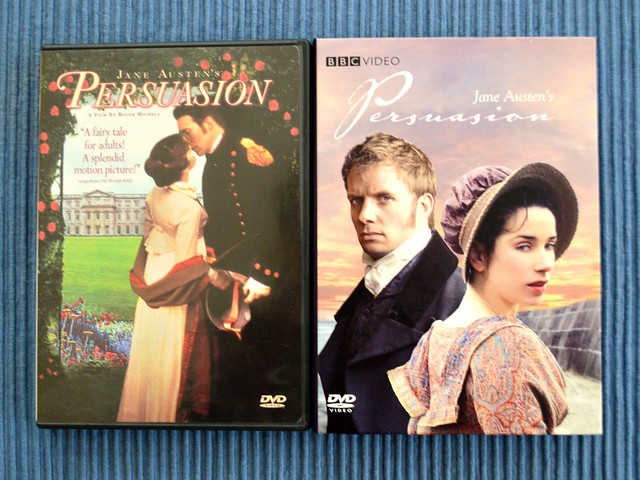 JASNA provides a map for tracking the physical locations of the story:

Map of locations in Persuasion. Jane Austen Society of Australia, via JASNA.

Like Mansfield Park, there aren’t terribly many screen versions of Persuasion. We rewatched the 2007 and 1995 movies, although apparently also a miniseries from 1971 is available.

The newer movie (from 2007, screenplay by Simon Burke, directed by Adrian Shergold) stars new-to-me Sally Hawkins as Anne Elliot. Rupert Penry-Jones, whom I know from the British spy series MI-5, plays Captain Wentworth. Unfortunately, I find both performances listless and unenergetic, even though the script – bafflingly – has Anne indefatigably running all over the city of Bath after Captain Wentworth at the end of the movie.

Minor performances, for example by Anthony Head (Giles! from Buffy!) as Sir Walter Elliot, are ok. There are some other oddities in the writing, filming and music which diminish my enjoyment of the story, but it looks like they actually went to Bath, which is great.

The 1995 Persuasion, however, is excellent. The screenplay is by Nick Dear, and Roger Mitchell directed Amanda Root as Anne Elliot and Ciarán Hinds as Captain Wentworth. I really like Root’s understated and considerate version of Anne; Hinds works well enough even if a few scenes tend towards hammy.

Although the picture quality is grainy, the soundtrack is nice, and there are subtitles (not a given on older DVDs). The props, locations and costuming are also great. This is my favorite version so far – in an ideal world, of course, we would be due another adaptation.