Moving on with our grand Jane Austen rewatch. Mansfield Park (1814) was Jane Austen’s third published novel and her first to be conceived and written when she was an adult. The story follows the growth of poor Fanny Price, who is de facto adopted by her wealthy relatives and transported miles away from her family. 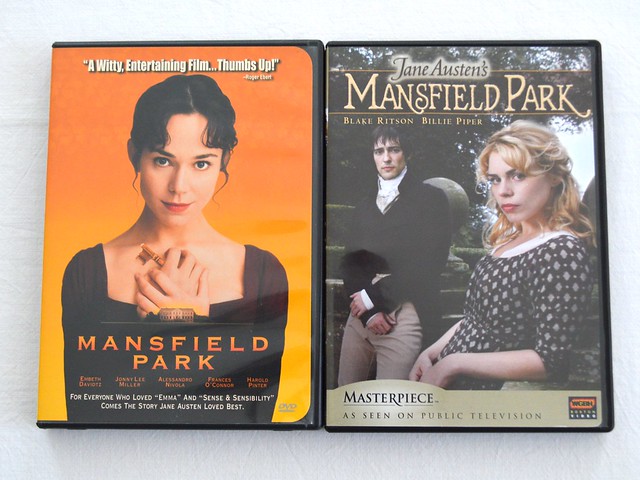 Here is a map provided by JASNA for tracking the physical locations of the story:

Map of locations in Mansfield Park. Jane Austen Society of Australia, via JASNA.

We only had access to two movie versions: one from 1999 and the other from 2007. I’d also like eventually to see the 1983 miniseries, for I see several familiar names among the cast.

Unfortunately, both adaptations have some issues. The 2007 Mansfield Park (screenplay by Maggie Wadey, directed by Iain B. MacDonald) casts Billie Piper (Rose in Doctor Who) as Fanny Price, and she does a good job. However, I don’t like Blake Ritson, so this Edmund Bertram remains uninteresting to me. There are also some pacing issues and an odd scene or two.

If you like Hayley Atwell as Agent Carter, you might want to check this one out, though, for she’s very good – a believably lively and charming but wily Mary Crawford. The rich but simpleminded Mr. Rushworth is expertly played by Rory Kinnear (who also performed Tanner in the three latest Bond movies).

What I really like, though, are two supporting characters: first, Fanny’s dear brother William is included (which the 1999 movie doesn’t do); second, Jemma Redgrave’s interpretation of Lady Bertram makes it believable that someone would’ve wanted to marry her (whereas the 1999 Lady B. is almost implausibly lethargic).

The older of these two Mansfield Park movies (written and directed by Patricia Rozema) is based not just the novel but also some events gleaned from Austen’s letters. It’s an interesting choice, and had we a dozen or so adaptations I’d probably appreciate it more, but as Mansfield isn’t often filmed I think it creates more missed opportunities than not. Another miss is Fanny Price’s wardrobe – bleah.

This movie is a treat for me in other respects: one of my favorte actors, Jonny Lee Miller, plays Edmund Bertram. He’s more recently – and deservedly – starred as Sherlock Holmes in the series Elementary. Lead actress Frances O’Connor projects Fanny’s vulnerability beautifully. The rest of the cast are great, too. For example, Lindsay Duncan gives an excellent, excellent double performance as both Fanny’s mother Mrs. Price and aunt Lady Bertram (even though I disagree how the character was written), and Hugh Bonneville’s Mr. Rushworth thoroughly demonstrates the actor’s genious and range.

Favorite fleeting moment: Hugh Bonneville’s Mr. Rushworth wiggles his pinky in his ear (presumably) to clean it while walking outdoors with his new fiancée, Miss Bertram. You can see it in this official trailer:

How… quaintly… charming (not!) of the character, and a simply brilliant piece of acting!