Getting back to the Jane Austen rewatch mini reviews! Sense and Sensibility was Jane Austen’s first commercial and critical success. Published anonymously (“by a lady”) in 1811, the novel focuses on two sisters, Elinor and Marianne Dashwood, and their very different approaches to life and love. 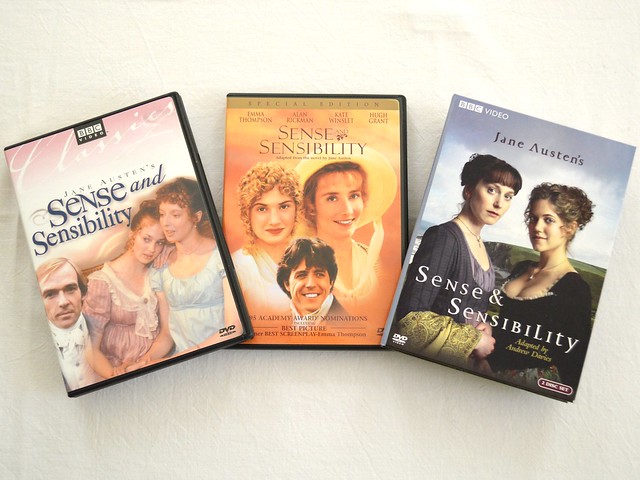 JASNA provides a handy map for tracking the physical locations of the story:

Map of locations in Sense and Sensibility. Jane Austen Society of Australia, via JASNA.

As befits a well-loved story, there are several adaptations. We had access to the 1995 movie and miniseries from 1981 and 2008. I might eventually want to check out Kandukondain Kandukondain (I Have Found It, 2000) and possibly Scents and Sensibility (2011); I think I’ll skip the 1971 miniseries.

The 1995 Sense and Sensibility movie written by Emma Thompson and directed by Ang Lee is excellent; in fact, it used to be my go-to version. Unfortunately it’s tripped up by the same problem that pretty much every Austen movie adaptation suffers from: time constraints. Miniseries fit Austen’s nuanced storytelling so much better. Even with that in mind, Thompson’s screenplay is perhaps the most skilled movie-length adaptation I’ve ever seen. And Ang Lee’s direction is visually beautiful, at times breathtaking.

If there’s a problem with the movie, I’d say it’s the age of the actors: almost every main actor is older than their novel counterparts, from Emma Thompson’s Elinor to Hugh Grant’s Edward and Alan Rickman’s Colonel Brandon; only Kate Winslet’s Marianne and Greg Wise’s Willoughby are even close. All performances are fantastic, there’s no mistake about it. They’re just too old: Elinor and Marianne are supposed to be 19 and 17, respectively, Edward and Willoughby in their mid- to early 20s and Brandon in his mid-30s.

My favorite scene: As Marianne is singing and playing the pianoforte at Barton Park, Colonel Brandon walks in and is stopped breathless by her performance and beauty.

Sense & Sensibility – “Weep You No More Sad Fountains” via waningautumn

The 1981 Sense and Sensibility miniseries (adapted by Alenxander Baron and Denis Constanduros, directed by Rodney Bennett) has the same primary problem as the Thompson movie: the actors are too old for their roles. In addition, the plot is rushed through at quite a clip. The series theme music is rather nice, but parts of the dialogue are lost due to the poor sound quality (with no subtitling on disc). Finally, there are some odd directorial choices (angles and cut-offs); the version definitely shows its age there.

I understand the omission of Margaret, the youngest Dashwood sister, from the point of view of time constraints, but I think it’s a failing. Also, very unfortunately, Irene Richards doesn’t convince as Elinor Dashwood. Tracey Childs as Marianne is better, and Bosco Hogan’s Edward is very personable and friendly once his reserve is broken through. I could imagine someone falling for a considerate man like him.

Peter Woodward, who played Willoughby, is the only actor I knew beforehand from his role in the Babylon 5 spinoff series Crusade. Like Hogan, he does a great job. It’s so very nice that the actor sings, too – Willoughby and Marianne are able to sing together like in the book. Other adaptations don’t really do that, sadly.

Elinor: “[Colonel Brandon] is a sensible man, and sense will always have its attraction for me.”

Elinor: “Yes, Marianne, even in a man over thirty.”

My favorite of the three adaptations, though, is Andrew Davies’s 2008 miniseries (directed by John Alexander). It stars Hattie Morahan and Charity Wakefield as Elinor and Marianne. Both were new to me, but I was familiar with the significant male actors: Dan Stevens (Mr. Edward Ferrars) is in the first few seasons of Downton Abbey, David Morrissey (Colonel Brandon) portrays the confused faux-Doctor in the Doctor Who Christmas special “The Next Doctor”, and Dominic Cooper (Mr. Willoughby) as young Howard Stark scratches science to see if it bleeds in Marvel Cinematic Universe’s Captain America: The First Avenger and Agent Carter (and rules as King Llane Wrynn in the Warcraft movie).

It was a gutsy choice of Davies to begin the series with Willoughby’s explicit seduction of a 15-year-old girl, an event which happens very much off-screen in the novel and most adaptations, but becomes the crux of the plot.

Another interesting scene that Davies lifted from between the lines is the duel between Willoughby and Colonel Brandon. It was nice to actually see how seriously the society took the former’s transgression. I also prefer Stevens’s livelier Edward to Grant’s monotonous interpretation.

The series does have some issues. For example, the Devonshire “cottage” that the financially strained Dashwood ladies had to accept was turned into a literal cottage instead of a good, solid house from the novel. The events are condensed, sure, but their pace doesn’t feel rushed like in the movie versions. Most of the writing, acting, propping and costuming are solid to excellent.

Acting-wise, Morrissey’s Colonel Brandon has one too many clunky “I’m not intruding?” moments, and his furrowed brows are a-plenty, but otherwise I like his performance. Mark Williams (father Weasley in the Harry Potter movies) is a simply fantastic Sir John Middleton! And I just adore Margaret (Lucy Boynton) in this version, although she is a much more outspoken character here than in the novel. I can’t wait for the new Murder on the Orient Express for more Boynton.

Margaret [dryly observing her expected role in the society]: “Girls just sit and wait for things to happen.”