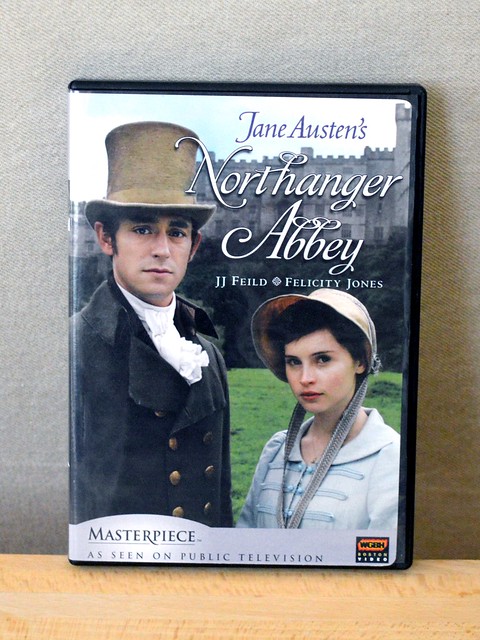 The 2007 movie version (screenplay by Andrew Davies, directed by Jon Jones) is the only one I’ve ever seen, although apparently there’s a version from 1987 as well. (Note to self: find it! That one has Cornelius Fudge er, Robert Hardy!)

The story covers a young naive heroine’s adventures first in Bath and afterwards at a remote country estate with a dark secret. JASNA provides a handy map for tracking the physical locations of the story:

Map of locations in Northanger Abbey. Jane Austen Society of Australia, via JASNA.

Felicity Jones stars as Catherine Morland, and Mr. Tilney is portrayed by JJ Feild (elsewhere e.g. Captain America: The First Avenger). Felicity Jones has also appeared in the brilliant Agatha Christie Doctor Who episode “The Unicorn and the Wasp” and later in Rogue One.

Both leads are top-notch, especially Felicity Jones as the wide-eyed and innocent Catherine, but the supporting cast is thoroughly excellent, too. I have no qualms with the adaptation; it’s a solid job through and through.

In the beginning, Catherine is actually shown running outdoors playing with her siblings instead of replacing her active, unladylike childhood with a voiceover introduction.

Unfortunately no-one’s uploaded a clip of that online, so here’s the PBS trailer instead: