Starting off the mini-reviews for our grand Jane Austen rewatch with Love and Friendship!

Lady Susan is one of Jane Austen’s earlier, less mature works. She started it circa 1794 and finished in 1805 when Austen was about 19; it was posthumously published in 1871. To my knowledge, it hasn’t been adapted to screen before Whit Stillman wrote and directed Love and Friendship, which was released in 2016. (I fansqueed about the production earlier.) 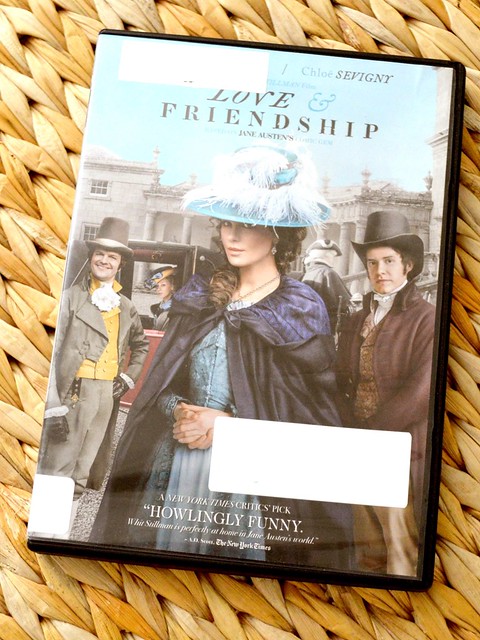 The original epistolary novel feels rather hastily wrapped up, as if Austen became less and less satisfied with letters as the sole plot-carrying devices. The adaptation naturally takes liberties, but the added dialogue and most of the scenes feel convincingly Austenian.

One successful change is the introduction of all major characters with almost still vignettes upon their first appearance. Kate Beckinsale’s Lady Susan Vernon is impeccably nuanced; a glorious performance of an odious character.

However, a new-to-me actor, Tom Bennett, completely steals the show as the rich, kind, thoroughly good-natured but unfortunately dim-witted Sir James Martin. Check out a glimpse of his cluelessness in the trailer – look for the “tiny green balls” and “Churchill” scenes:

Sir James Martin [at a dinner table]: “How jolly. Tiny green balls. What are they called?”

Sir James Martin [while visiting a country estate by the name of Churchill]: “Churchill? That’s how you say it – all together like that. I’d heard ‘church’ and ‘hill’ but couldn’t find either. All I could see was this big house.”

There’s unfortunately some clumsiness in transitions (maybe due to cutting decisions?) and in a few scenes. The supposed appeal of Lord Manwaring also totally escapes me. I don’t think he was even given any lines at all in the screenplay (as opposed to a completely redundant country curate who did get to speak).

All in all, though, it’s great to see the story finally on screen.