Last year, spurred on by the hashtag #readwomen2014, I made an effort to read more books written by women. In the beginning of the year, I compared my previous years’ reading lists to get a rough idea how many male vs. female authors I tend to read.

Here are my complete reading statistics to date:

I’ve counted every author/editor once, so a book co-authored by two men and a woman gave two male authors and one female one for my tally; that’s why the number of books may be smaller than the number of authors totaled. Most of my reading is speculative fiction of some sort – fantasy and scifi – but not all of it. I include graphic novels, and count both authors and artists (if different) as authors for the purposes of this list. In addition, these numbers do include a few books without identifiable authors. They were omitted from the gender count but included in the book count.

In 2014, instead of hovering between a third to a half, the percentage of books by women in my reading menu went to two thirds, roughly speaking. This was a welcome find, since I didn’t count any totals during the year. It was also deeply satisfying to note that I recovered from the 2013 slump (of only 27 books the whole year) and read a whopping 60 books. At least, 60 is whopping for me. 🙂

Apart from the not exactly surprising find of “more attention works”, I noticed a definite change in my perspective. For years, stories with only white male protagonists (or with only one woman / black / Asian / your-variety-of-exotic-other character) have seemed imbalanced to me, but I didn’t think about it any further. The tokenization stuck out like a sore thumb, of course, but I basically chose to ignore it. It was what it was.

Now, however, I’ve gotten tired of living with less than a fully operational hand, to extend the metaphor. I want to see more people like me, or at the very least, someone I can relate to or empathize with in a story that speaks to me – in other words, I want writing I’m interested in with characters that I find fascinating by people whose perspective and skill I appreciate. As Michi Trota writes for the Uncanny Magazine:

“We’re often drawn to stories, characters, and people because we find something in common with them, but empathy and connection aren’t reliant on a single, narrow axis of sameness. … I love characters and stories not just because they involve someone like me, but because they take what seems familiar and expand it beyond mere reflection, revealing depths and complexities outside my own perceptions.”

Fortunately, it’s getting much easier to find a broader variety of not only protagonists / point-of-view characters, but of writers with different backgrounds. After reading (and watching, because this also applies to my movie / tv choices) a more heterogeneous range of POV characters, worlds without that variety simply feel lacking. You could even say that, having taken steps to mend the poor sore digit, it’s such a delight to have a fully-functioning hand, thumb and all.

Here’s a gratuitous photo of my first 2015 reading pile: 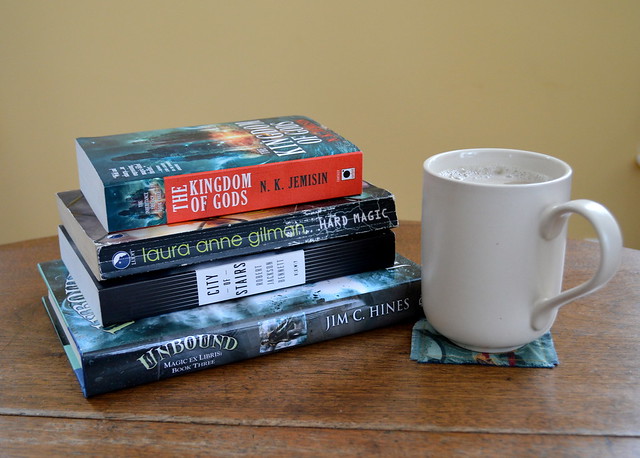 A 50-50 split between male vs. female authors. Nice start for the year.

One thought on “Reading Numbers for 2014, with Musings”